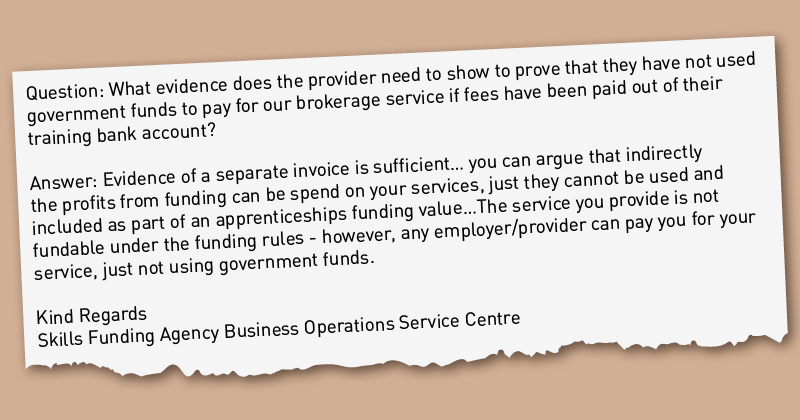 Taking fees for brokering apprenticeship funding is acceptable, according to correspondence from the Skills Funding Agency – as long as payments aren’t made directly from government funding.

The government recently promised to crack down on brokering, which can see subcontractors charged up to five per cent of their total contract funding in commission to be matched with a prime.

The AELP now wants this loophole fixed for good, to “ensure the need for brokerage is eliminated”.

Funding rules were changed last year to prevent brokering, and state that “funds in an employer’s digital account or government-employer co-investment must not be used for… specific services not related to the delivery and administration of the apprenticeship”.

But the director of a Yorkshire-based firm that openly offers a “subcontracting and brokerage service” on its website has denied any wrongdoing, and has correspondence from the body that became the Education and Skills Funding Agency to prove it.

It is fantasy and fallacy to imagine that if brokering was banned, the funds previously paid in commission would find their way into learning

Daniel Scargill, the boss of Diamond Advisory Services, was told that “the service you provide is not fundable under the funding rules – however, any employer/provider can pay you for your service, just not using government funds”.

The message, seen by FE Week, also indicates that profits from funding can still be “indirectly” spent on his brokerage services, though “they cannot be used and included as part of an apprenticeships funding value”.

Mr Scargill claimed while the funding allocation system “is not a perfect one”, his company was “helping to perfect it”.

“It is both fantasy and fallacy to imagine that if brokering was banned, the funds previously paid in commission would find their way into learning,” he added.

AELP boss Mark Dawe was not at all happy to discover the existence of this guidance.

“Anything that takes funding away from frontline has to be assessed for value for money. Sadly the clunky funding system and disastrous procurement exercises mean for many quality providers, they have to find a prime contract partner,” he said. 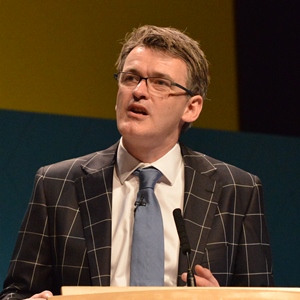 “This will always lead to a potential market for intermediaries. We are working closely with the ESFA to try and ensure the need for brokerage is eliminated.”

Diamond Advisory Services was previously known as the Funding Brokers, but its name was changed a year ago.

FE Week reported on the Funding Brokers in April 2016, during an investigation that found brokers were typically charging subcontractors up to five per cent of their government cash for matching them to a prime provider.

The firm had posted an advert which said “we have been providing this service for over three years, securing in excess of £100 million in the process for our clients”.

“Diamond Advisory Services offers a diverse range of services to a similarly diverse clientele,” Mr Scargill said this week. “As such, a decision was taken regarding the company name that the Funding Brokers was inappropriately narrow in what it conveyed.”

Quattro Consultancy, which offers on its website to match prime contractors “looking to work with training providers on a subcontracting or associate basis”, also denies that moves to cut down on brokerage have had a meaningful effect.

“The key change to the rules is that ‘from May 1, 2017, no government money can be used to pay brokers’ fees’,” the firm which did not comment this week, said on its website. “Will this affect our clients? Well we don’t think so.”

This loophole is not the first example of weak enforcement. It was reported last year that the NHS and Nottingham city council were continuing to charge what amounted to brokerage fees for allowing providers access to apprenticeship contracts.

The Department for Education clarified its approach to brokerage this week.

“Any government funding provided for apprenticeships must be spent on apprenticeship training and assessment only,” a spokesperson said.

But third-party brokers appear to be in the clear, as it was stressed the ESFA would “only investigate organisations with which it has a contractual relationship”, referring employers or providers.