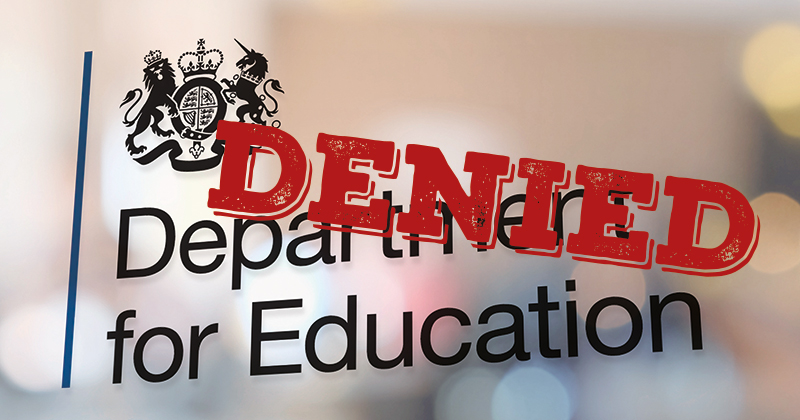 The Department for Education has ruled out an increase in funding for 16- to 18-year-olds next year – dealing a blow to campaigners fighting for more cash.

In a letter to providers published this afternoon, the department confirmed that there would be no change in funding for 2018/19.

“This is in line with the commitment made in the 2015 spending review”.

James Kewin, the deputy chief executive of the Sixth Form Colleges’ Association, said the decision – made “despite the best efforts of our Support Our Sixth-formers campaign” – was “deeply disappointing and continues to be a major barrier for improving social mobility”.

But he added that he was “encouraged” by the appointment of Damian Hinds as education secretary, following Justine Greening’s resignation yesterday, who he said was “deeply committed to social mobility”.

“We have protected the base rate of funding for all 16- to 19-year-old students until 2020 to make sure every young person has access to the education or training they deserve,” said a Department for Education spokesperson.

“We are also giving colleges an extra £600 for every additional student that continues to study maths to an advanced level after their GCSEs.”

The Support our Sixth Formers campaign, backed by major players including the Association of Colleges and SFCA, as well as FE Week, has been calling for a £200 “SOS uplift” in 16-to-18 per-pupil funding rates.

As previously reported by FE Week, Amanda Spielman, Ofsted chief inspector, said during her speech at the launch of the Ofsted annual report in December that the “sector will continue to struggle” without an increase in the base rate funding for this age group.

This is the sixth year that the funding rate for 16- to 18-year-olds has remained unchanged – meaning that providers have faced a real-terms funding cut over that time.