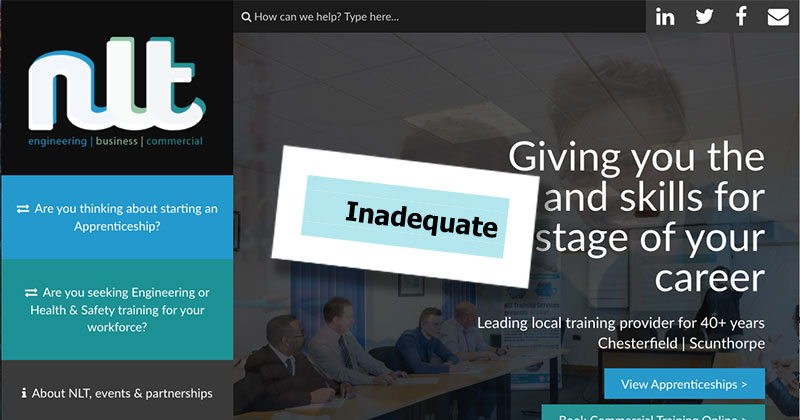 An independent training provider that has slumped two grades to ‘inadequate’ is trying to get taken over.

Chesterfield-based NLT Training received the lowest possible grade across the board from Ofsted – down from ‘good’– in a report published today.

Sarah Temperton, its chief executive, wants to be taken over by WEBS Training Ltd, a Nottingham-based furniture training provider rated ‘good’ in April this year.

She hopes that the takeover, which she said is agreed between the companies but is still subject to Education and Skills Funding Agency approval, will help to secure continued apprenticeship training at NLT’s Chesterfield and Scunthorpe centres.

Providers that receive a grade four usually have their funding cancelled by the ESFA, which can force them to close.

“If the takeover does not gain approval, there is a real risk that valuable bridge between education and employment may now be taken away from a number of disadvantaged young people across Scunthorpe and Chesterfield,” she said.

Ms Temperton said she was “extremely disappointed” at the verdict, and that she would be “challenging them at a number of levels”.

Samantha Jones, the managing director of WEBS, said the two providers had already “worked together for a number of years and combining forces provides many opportunities”.

Declining achievement rates at NLT, which specialises in engineering and manufacturing apprenticeships and study programmes, were among the issues dragging it down in the report published this morning.

“A large proportion of apprentices have not completed their apprenticeship by the planned end dates, many of which were unrealistic,” it said.

Achievement rates among study programme learners were deemed to be “very low”, as was the rate at which these learners “successfully progress to further education, training or employment”.

“A significant number of learners leave or are dismissed from the programme without achieving all their learning goals,” it said.

NLT Training had 252 learners and apprentices at the time of inspection, as well as a 2017/18 ESFA allocation of £600,979 for apprenticeships and £333,924 for study programmes. It is on the register of apprenticeship training providers.

The standard of apprentices’ off-the-job training was criticised in the report for failing to “focus sufficiently on developing their understanding of engineering principles”.

Inspectors found that apprentices’ on- and off-the-job training wasn’t well-coordinated, and that “training officers fail to exploit workplace activities fully so that apprentices can practise and apply learning they have developed at the training centre”.

“Not all training officers have sufficiently high aspirations for apprentices and learners.”

Leadership was heavily criticised in the report, with strategic and operational management deemed “inadequate”.

“Decision-making is uncoordinated. Senior leaders, managers and directors are not taking sufficient action to ensure that learners on the study programmes and apprentices receive high-quality training,” it said.

Directors had received inaccurate information in 2015/16 which meant they were “unaware” of the decline in performance and were “insufficiently active in identifying and challenging weak performance and actions that could lead to reputational damage”.

But it noted that “the reports that directors now receive are appropriate to inform effective scrutiny”.

And it said that Ms Temperton, who was appointed in late 2017, was “ambitious for the company” and “under her guidance, directors and senior managers have started to identify key actions to improve standards”.

While safeguarding at the provider was “effective”, the report found that “apprentices’ and learners’ understanding of fundamental British values is often underdeveloped”.

NLT Training is the third independent training provider to receive the lowest possible grade from Ofsted since September, after Activ8 Learning and First City Training both received a grade four in reports published in October.

A Department for Education spokesperson said: “We are aware that Ofsted has published its inspection report on NLT Training. We will take swift action to work with NLT Training to ensure that impact on learners and employers is minimised.”