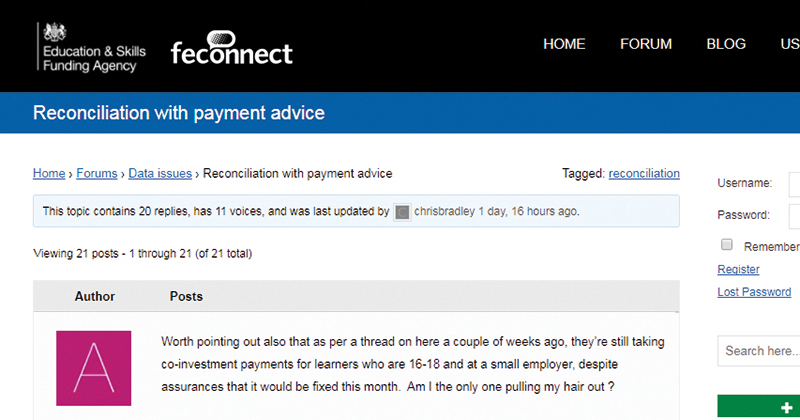 The government has been swamped with complaints about its malfunctioning apprenticeship payment systems, which are incorrectly demanding cash from levy-funded employers.

Numbers providers have been leaving anguished and irate messages on the Education and Skills Funding Agency’s online FEConnect forum.

One of many to leave a message is Chris Bradley, who showed FE Week an apologetic message he recently received from the ESFA’s business operations service centre.

It recognised that the apprenticeship funding system had been incorrectly expecting cash contributions from levy-funded employers, in a case relating to Nottinghamshire-based provider SREducation, where Mr Bradley is data and contracts manager.

It is the people in control that have no clue. Heads need to roll in my view

“We have identified an issue with the funding calculation which is incorrectly classifying learners as co-funded and reporting an expected employer contribution for learners who should be fully funded,” the message stated.

“We are working on a fix for this. Once this is live it will correct any future payments, but a further change, which will be made at a later date, will be required to correct the payments already made.

“Please accept our apologies for any inconvenience caused.”

Only employers with an annual payroll of at least £3 million contribute to the levy, which was launched in April this year, and their training is funded using this pot.

Meanwhile, smaller firms also have to contribute to training costs for their first time under the new system, through a 10-per-cent co-investment model, which should involve the government paying 90 per cent of costs from leftover levy revenue.

Mr Bradley warned on FEConnect about “confirmation from period-end reports” that levy-payers had been “coming through as 90-per-cent ESFA and 10-per-cent employer contribution due”.

He went on to express sympathy for staff working on the ESFA’s service desk, saying it was “not down to them”.

“It is the people in control that have no clue. Heads need to roll in my view,” he added.

Another user of FE Connect concurred.

“I don’t feel I am being unreasonable here, but I would like to be able to reconcile funding summary reports, remittance advice, monthly co-funding reconciliation reports so that it all agrees. Am I the only one pulling my hair out?” they said.

It notes: “This issue has been raised with our technical team as a defect and they are working on a fix.”

Neither the DfE nor the ESFA were available to comment on the complaints or issues with the payment system.