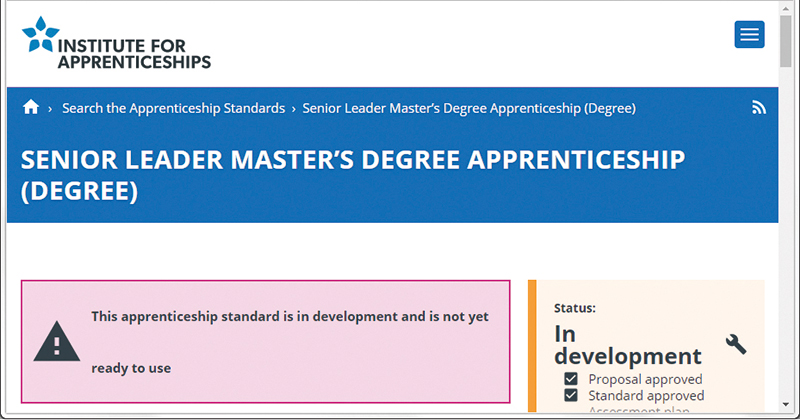 Thirteen separate apprenticeship standards with approved assessment plans have been left in limbo for two or more months because their costs still haven’t been agreed, FE Week can reveal.

It is understood that the holdup is the result of various new lengthy and complicated processes which came into force when the Institute for Apprenticeships introduced a funding board in April, which tries to secure value for money.

These processes have caused “stalling in decision making”, according to trailblazer groups who have developed the 13 standards, who admit they are “astonished” at the lack of urgency officials are displaying in approving costs.

“We are frustrated,” said Colin Huffen, the head of education at the Chartered Institute for the Management of Sport and Physical Activity, who has been leading on the development of the ‘leisure duty manager’ standard.

The problem, he said, comes from “complicated, unstandardized, lengthy processes for rate approval that seem to change regularly without notice to trailblazer groups”, and the “ability of the IfA to deal with anything quickly, outside of the standard approvals cycle”.

He added that his group are “astonished at the proposed time for approval” of a new standard, which now has a best-case scenario of 12 months.

“This does not meet their needs in a fast paced commercial world,” he said.

Delays over costs are a new obstacle in approving standards; before the IfA was put in place, the funding band was allocated at the time of signing off the assessment plan.

But now there are various processes which can put cost approval on hold (see chart), and the IfA ultimately leaves final responsibility to the apprenticeships and skills minister.

The effects of this longwinded process are already being felt.

There are 124 employers with 902 apprentices ready to start their MBA apprenticeships, expecting teaching to get underway in January, according to the Chartered Management Institute.

Even though the standard was approved in August, and had an official launch last month, the fee scale will not be finalised until the end of January, meaning it cannot get underway beforehand.

The trailblazer group involved wants the funding band set at £27,000, but that is contested by the IfA.

“Processes have been changing, which has not been helpful and has created huge frustration among the employers ever since the standard was approved,” said Petra Wilton, director of strategy at the CMI, which is supporting the trailblazer group responsible for developing the senior leader master’s degree apprenticeship.

“Organising apprenticeships is quite a big personal commitment for individuals to potentially rearrange lifestyles to do them. They’ve taken the decision and got themselves excited for this and now there is personal frustration.”

Mr Huffen said his trailblazer group was also in dispute with the IfA over the funding band for the ‘leisure duty manager’ standard. It was initially proposed to cost £3,500 but his group wants the price set at £5,000.

“The delay in approval starts a chain of delays for training providers and end-point assessment organisations in developing programmes and resources to deliver and assess the standard,” he said, pointing out that the holdup also delays the recruitment of apprentices for employers.

A spokesperson for the IfA explained that the institute took the “conscious decision” to publish assessment plans for standards in development “as soon as we can – not to wait until the remaining elements of the standard are also approved”.

He said that while this does mean there can be a “gap” between the assessment plan’s publication and the standard being approved for delivery, trainers and assessment providers “benefit from having greater time to prepare accordingly”.

“We listen closely to feedback from trailblazer groups and all those involved in apprenticeships, and are working hard with them to improve the process,” he added.

The Department for Education would not provide any separate comment.