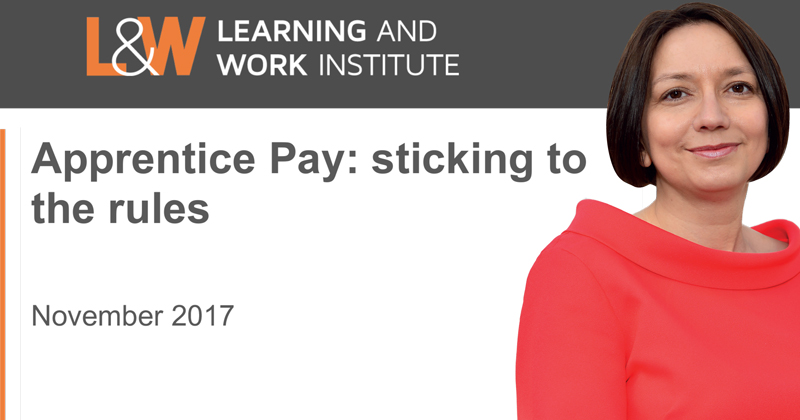 The government should make sure employers are aware of the 20-per-cent off the job training rule, sector figures have said, after nearly a third were shown to be oblivious.

In a survey of just over 800 employers with apprentices currently on their books, the Learning and Work Institute found 32 per cent did not realise they had to allow their apprentices one in five days of training off the job.

A further 23 per cent did not know that this training time should be included in an apprentice’s contracted hours of employment.

Teresa Frith, a senior policy manager at the Association of Colleges, described the findings as “disappointing but not surprising”.

“Whenever there’s a big reform of education and training rules, employers struggle to keep up,” she said. “Colleges make considerable efforts to keep the employers they deal with up to date, but the task is huge and the activity is only funded if employers actually send apprentices for training.”

Dr Fiona Aldridge (pictured above), the LWI’s assistant director, said improving awareness “should be a priority for government, with training providers having a key role to play in supporting this”.

“It is concerning, both for quality and for apprentice pay, that nearly a third of apprentice employers appear to be unaware of the off-the-job training requirement and nearly a quarter are unaware that this should be paid,” she added.

The National Society of Apprentices, which helped with the survey, claimed the findings follow a “depressingly familiar” theme, of “apprentices not receiving the training they’re entitled to”.

“It is time for some evidence that this unacceptable situation is being taken seriously,” a spokesperson said.

According to the government’s guidance, off-the-job training must amount to “20 per cent of the apprentice’s contracted employment hours across the whole apprenticeship”.

In final apprenticeship funding rules for providers from May 2017 to March 2018, training is defined as “learning which is undertaken outside of the normal day-to-day working environment and leads towards the achievement of an apprenticeship”.

The Association of Employment and Learning Providers called as long ago as April for the 20-per-cent minimum to include time teaching compulsory English and maths resits.

It also wants blended learning to be properly recognised within the definition, as “well supported distance learning should be supported and not discouraged”.

“It is still relatively early days for the 20-per-cent requirement amidst a raft of changes, and we would expect many more employers to be aware by the end of 2017, but we fundamentally disagree with its imposition as a rigid rule,” its boss, Mark Dawe, said.

A Department for Education spokesperson admitted it had “more to do”.

“We are undertaking a wide range of engagement activity to ensure employers of all sizes are aware of providing at least 20 per cent off-the-job training for apprentices. This makes an apprenticeship distinct from other work-based learning,” she said.

“Throughout the implementation of our reforms, we have continued to engage with thousands of employers and training providers, helping them to understand the benefits of this route.”

Awareness of the rule was found in the survey to be strongest in the education, IT & telecoms, hospitality, and leisure sectors, but much lower in media, marketing, advertising and sales.

The LWI commissioned the research, which involved 2,000 employers in total, including those without apprentices, after the government’s 2016 apprenticeship pay survey suggested one in five apprentices were paid less than their legal minimum wage entitlement. The government will from April increase the apprentice minimum wage from £3.50 to £3.70 per hour.

“The aim of the survey was to find out more about why there appears to be a problem with apprentice pay non-compliance,” said its chief executive Stephen Evans.