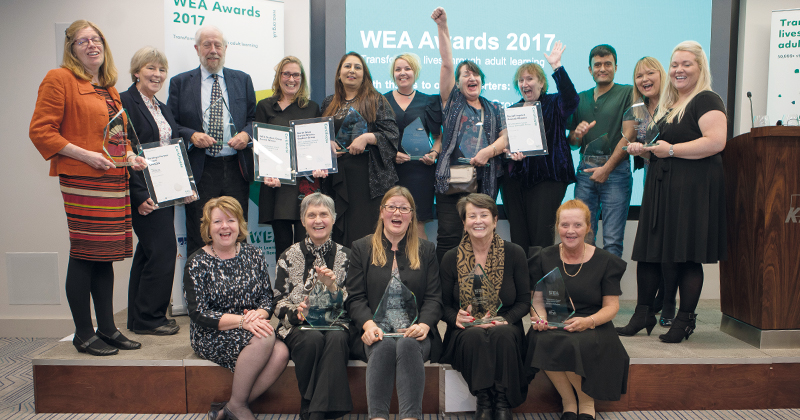 Eight people who overcame all sorts of barriers to take their first steps towards teaching other adult learners have been crowned ‘the best student group’ at this year’s Workers’ Educational Association awards.

Now in their fifth year, the awards celebrate the people – including learners, tutors and WEA staff – who have transformed their own lives and the lives of those around them through lifelong learning.

Among them are the eight learners at the WEA’s New Leaf project, based in Cheshire and Warrington and funded by the Big Lottery Fund.

The group impressed the judges with their “clear evidence of collective learning and support for one another” during their 10-week level three NCFE qualification in education and training.

Between them they have had to tackle a range of difficulties including dyslexia, cerebral palsy and self-esteem issues related to abusive relationships to complete their course, which prepared them to teach adult learners.

Ruth Spellman, WEA’s chief executive, said she was “moved and humbled” by the stories of the group, and all the other winners.

They “show the breadth and depth of the WEA and our enduring capacity to engage hearts and minds in the serious business of learning. The outcomes and impacts on individuals and communities are truly inspiring,” she said.

Other winners include Sharon Proud, a nursing assistant studying for a level two functional skills qualification, and Mohammed Sadiq Omari, who joined an ESOL and employability project.

They were named joint winners of ‘the Olive Cordell skills for life student award’, which recognises learners that have overcome substantial barriers, after judges were unable to choose between them.

Sharon nearly died in February 2017, partway through her WEA course, in Ashington, Northumberland.

She described it as a “life-changing moment” that gave her a renewed focus, and she now has a place at Teesside University to study a higher apprenticeship in healthcare.

Mohammed moved to the UK from Afghanistan in September 2015, where he had no formal schooling and hadn’t learned to read or write.

Through his six-week course in 2016 with WEA North Ayrshire council, he gained work experience and improved his spoken English, and was offered a job as a result.

Jane Walton, based at WEA in Sheffield, was presented with ‘the WEA tutor award’ for her “tireless” work to support and inspire students and staff over the past five years.

And Carole Clohesy was rewarded with ‘the Olive Cordell skills for life tutor award’ for her work teaching ESOL at WEA’s Salma Centre in Leicester.

‘The WEA volunteer award’ went to Penny Stewart, for her 25 years of commitment and passion to the Petts Wood and Orpington branch in Bromley.

Margaret Callaghan and Debbie Corrigan, a mother and daughter, were jointly awarded ‘student of the year’, after they overcome dyslexia to have a book of stories and poetry published thanks to their studies with the WEA.

Angus O’Henley of North Ayrshire council was presented with ‘the WEA regional partner award’ for its work with the WEA on its ESOL and employability project, while the Huntingdon branch went home with ‘the WEA branch award’ in recognition of its successful efforts to boost learner numbers.

Six regional winners also received awards at the event, while playwright and screenwriter Lee Hall and Big Issue co-founder Lord John Bird were made the first ever fellows of the WEA in recognition of their long-lasting contribution to adult education.