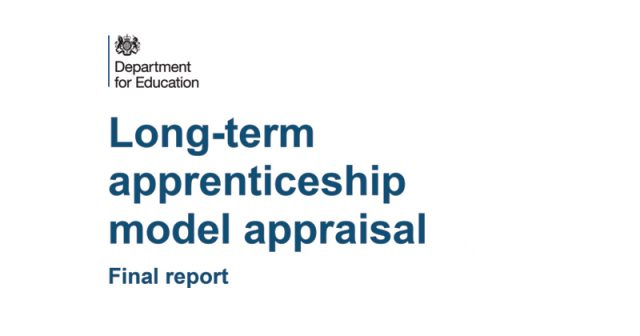 A long-awaited report on whether the government’s forecasting tool to predict apprenticeship starts is working has caused dismay over “seriously flawed” assumptions.

Cambridge Econometrics won a £15,000 contract in March to assess the Department for Education’s apprenticeships projection tool, that looks ahead to resulting spending requirements under the new apprenticeship levy-based system.

In its tender for the research project, the government referred to a “forecasting model” to project apprenticeship starts and costs for both levy and non-levy paying employers for 2017-18 and 2020-21.

The due date for the research was May 31, but we reported in early September that the DfE had denied our Freedom of Information request to see the resulting report, and refused to specify when it would be unveiled.

This includes that “only 80 per cent of demand [from lev-payers] will be met”, overall growth in starts with levy-paying employers will be 20 per cent; and that the 10 per cent co-investment rate will result in a “10 per cent increase in starts”.

Only employers with an annual payroll of at least £3 million currently pay the levy, while smaller firms also have to contribute to training costs for the first time, through a 10-per-cent co-investment model.

Having read the report, Association of Employment and Learning Providers boss Mark Dawe said: “If it’s true that the government has been working on an assumption that only 80 per cent of demand from levy payers will be met from levy funds, then it must provide a separate guaranteed minimum budget of £1 billion a year for the smaller non-levy paying employers.

“The fact that the other assumptions in the paper look seriously flawed underlines AELP’s case for an open debate on what the model should look like when all employers join the Apprenticeship Service in April 2019.”

Mr Dawe intervened over non-levy payers following a 61 per cent drop in apprenticeship starts for May, June and July fell 61 per cent, compared to the same period last year, which it is feared reflects in part growing reluctance from smaller employers to take on apprentices.

He warned last month that the government’s second attempt at a £650 million non-levy apprenticeship funding tender was descending into “farce”, after a series of late “clarifications” and document updates were sent out.

Cambridge Econometrics researchers were set the task of reviewing the design of the government’s forecasting model, to consider whether it worked or if other approaches might improve its quality and capability.

The resulting report conceded: “It is recognised that given the major changes that have been made to the apprenticeship system over the recent past that extrapolation of past trends – even using sophisticated econometric techniques – may provide no guide to the future.

“At this stage, it is not clear – because the policies are so new – how employers will behave in the new demand-driven system.”

It did say improvements could be made, although the current model was said to be “well-suited to the users of the model and the intended audience of the outputs” – generally policymakers.

Key recommendations include greater recognition of the impact of the economic cycle on apprenticeships starts, progression and completion rates, and consideration of whether apprenticeships are “given to existing employees or new recruits”.

It also pointed out that “preliminary evidence suggests that employers in some industries may be more sensitive to the policy mechanisms than those operating in other industries”.

Considerations of employer demand across different industries may, it therefore argued, could help to improve the model.

The DfE was approached for a response to the report’s findings and Mr Dawe’s comments. A spokesperson said in response: “Our apprenticeship reforms have put control back into the hands of employers so they will gain the skilled workforce they need to compete globally.

“We developed the model primarily for the purposes of the financial control of apprenticeship spending in the medium term. We are continuously monitoring the model’s performance.”