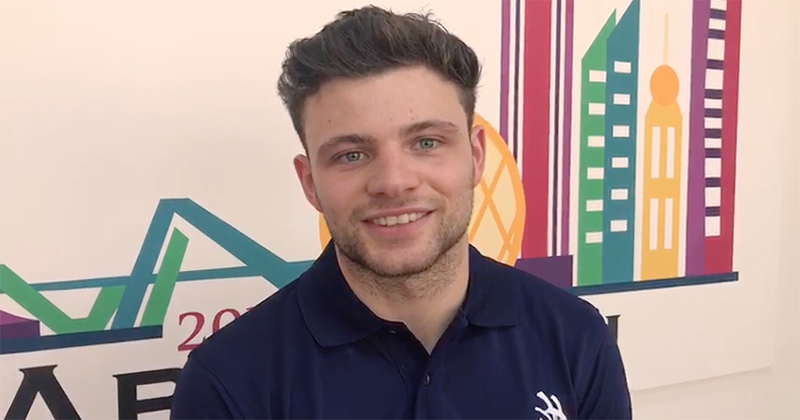 Emotions were high as the first round of Team UK competitors completed their work for WorldSkills UK today.

Jordan Charters, from Edinburgh College and employer George Charters, was captured by FE Week completing his work for what was the first competition to finish today.

He spoke to FE Week afterwards, saying that to succeed at the highest level of international competition “perfection is really the only option”.

“The relief is incomparable, “he added afterwards. “I’m feeling a bit emotional as well which is all good. It’s quite special. I’ll probably never feel like this again.”

And Bridie Thorne had a huge crowd cheering her on as she came to the end of her hairdressing competition.

Angus Bruce-Gardner, from provider Waters & Acland and employer Silverlining, was also interviewed after his competition in cabinet making.

“I don’t think I’ve done as well as I could have done, things have gone wrong, but overall I’ve got the piece finished [a cabinet] and it’s all done in time.”

He was thrilled with all the support he had received, including from family who travelled out there.

“My mum, dad and sister have been out all week, supporting me through this hole journey,” he said.

Betsy Crosbie, competitor in mechanical engineering CAD, from New College Lanarkshire, said it had been a “really good competition” as the four gruelling days came to an end.

“I’m really happy with all the work I’ve produced,” she told FE Week.

Daniel Martins, from EAS Mechanical and Briggs and Forester, also shared his thoughts after competing in plumbing and heating.

He said: “It was a really tough few days. I’m absolutely shattered now but happy with my work.”

Hearing from #TeamUK Daniel Martins @worldskillsuk in front of his @WorldSkills competition plumbing and heating piece. Well done from all @FEWeek pic.twitter.com/ogtlEmR4z6

Harrison May, from British Gypsum and H&R property Enhancement, told FE Week it was “absolutely amazing” to have finished the plastering competition.

Family of Daryl Head supporting #TeamUK’s car painter as he enters this final 30 mins of his competition #WS_abudhabi pic.twitter.com/W8V3MnbAnh

Andrew Gault said he would “go away with my head held high” at the end of the auto body repair competition.

“I’m happy with what I’ve done – I don’t think I could’ve done any better,” he added.

Andrew Gault just finished his auto body repair final day #WS_AbuDhabi for #TeamUK what a moment for the lad pic.twitter.com/AUNbhVHbbD

Beautiful reception for Kaiya Swain as she wraps up her beauty therapy competition #TeamUK #WS_AbuDhabi pic.twitter.com/MyQW4283im

Excitement is building as all the categories reach completion, and you can follow their progress on Twitter through @FEWeek.

You can view all our WorldSkills videos here.