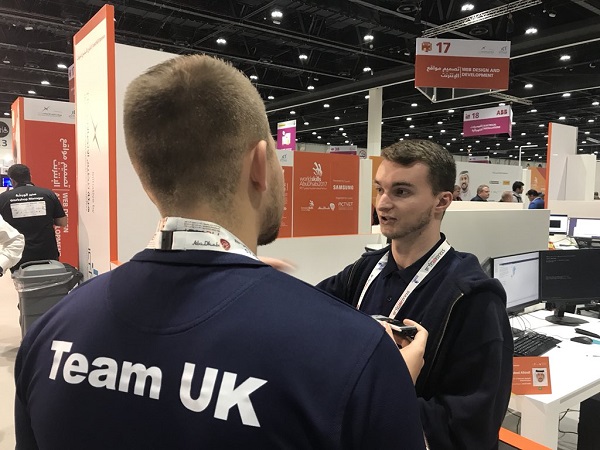 Team UK’s Shane Carpenter is hoping the 12 weeks he was allowed off work from Britain’s biggest defence manufacturer to prepare for WorldSkills is enough to bag him a place on the podium at the end of competitions.

The 21-year-old IT Network System Administrator, who benefitted from the generosity of BAE Systems during the summer, said he “couldn’t be happier” with how day one has gone.

Shane (pictured above), who trains at Nescot College, will be set a different task in cyber security over each of the four competing days and will have to get his head around fixing systems on a variety of platforms, including Microsoft, and troubleshooting various “topologies”.

Today he was working with Cisco systems and said he had a “massive topology [the arrangement of the various elements of a communication network] to configure different protocols and basically make everything work”.

“I was very very happy with the progress I made, it went amazingly well and I have had the day of my life,” he added.

Shane is putting his early success down to the mammoth three months that his employer allowed him to have off to train doggedly for the competition.

“BAE Systems is a pretty awesome company to work for. I took about 12 weeks off work to train for the event in which me and my expert went to college every day during the holidays and studied and practised there from 8am till 5pm just constantly doing work to prepare for it.”

He started his WorldSkills journey at the age of 16 when he entered regional competitions after his college spotted his talent in IT. But it wasn’t until he won gold at the Skills Show in 2015 that he was then made part of Team UK.

“Being here in Abu Dhabi has been a long time coming. For me it has been a five year journey and I’ve learnt a lot, it has honestly been the best experience of my life.”

He added that his goal in the competition is to get a top three finish – a feat that no other UK competitor has managed to achieve in IT Network System Administration. 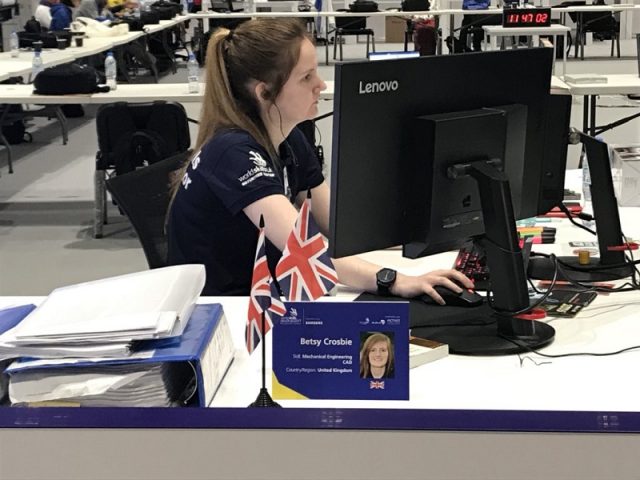 The 21-year-old, who trains at New College Lanarkshire, is one of only two girls competing in her skill (out of 25).

But despite being in a male dominated job, Betsy is confident she will go far in the competition.

“Today went really well, I got everything finished and to a good standard that I was happy with,” she told FE Week.

“There is still a little bit of pressure obviously being male dominated but I just come in every day and feel confident I know my skill and just smash it.”

Betsy, who won a medallion of excellence in EuroSkills Gothenburg 2016, takes part in a “blind” skill – meaning she doesn’t know what is coming up until the morning of each day.

Today she had to do a design challenge using 3D design printing.

“We were given a small torch and we had to make a handle for it to essentially make it all work. We had to make a 3D model for it so it was functional.

“There definitely is a step up from EuroSkills obviously firstly because there are so many different countries which adds to the pressure and make it more nerve wracking but I just get on with it.”

No matter the result at the end of WorldSkills Abu Dhabi, Betsy will be taking home more than just a medal.

When she first started out she said she was “really shy” and when she first went to college she didn’t speak to her lecturers for two years. But that has all changes now.

“By being part of WorldSkills and the squad it has definitely brought me out of my shell. It puts you out of your comfort zone not just in your skill but in your social life but it has been well worth it for me.”

Send your message of good luck to the team using the #TeamUK and our ‘Go Team UK’ social media image. (click here to download). Also include the official event hashtag #WS_AbuDhabi.

FE Week are proud to be the official media partners for Team UK and WorldSkills UK, sponsored by Pearson.