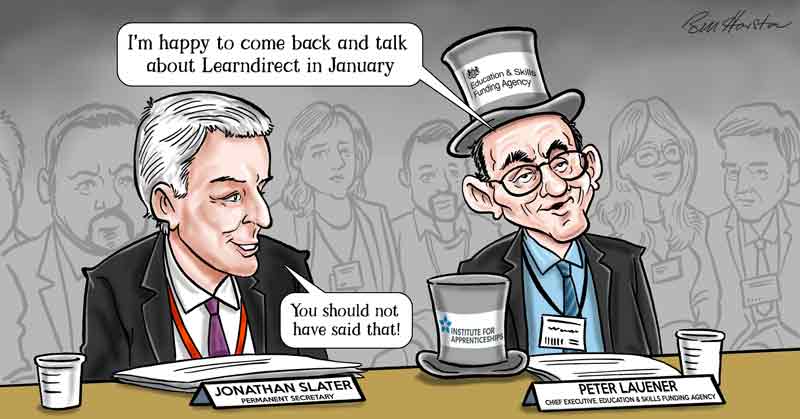 The outgoing head of the ESFA has claimed personal responsibility for the decision not to terminate Learndirect’s adult education budget contract after its ‘inadequate’ Ofsted rating.

Although the DfE’s permanent secretary Jonathan Slater denied at the same meeting that the UK’s largest training provider had been given special treatment, Peter Lauener insisted it had been his decision to “take a different approach”.

The ESFA rule is to “typically terminate the contract and seek a better provider, subject to protecting the interests of learners”.

However, even though he first became aware at the end of March of Ofsted’s intention to hand out a grade four, Mr Lauener made the decision to allocate Learndirect £45 million of funding to pay for current and new courses for 12 months until July 2018.

Meg Hillier, the chair of the public accounts committee, asked Mr Lauener if Learndirect “was too big to fail” during a meeting on October 12.

“No, it wasn’t,” he replied. “In fact, we had a contingency team set up to allow us to put in place our standard closure arrangements if we judged that was the right thing to do.

“But, and I take personal responsibility for this, I looked at the case very carefully, and I felt the right thing to do in terms of continuity of provision for learners and other service users – Learndirect runs two big testing processes with significant numbers of people getting tests for citizenship and teacher skills tests – so I took the view that we should take a different approach in this case.”

Mr Slater added that his decision not to issue a three-month termination notice came about because of the impact for learners and because Learndirect had received grade three ratings in several categories despite an overall grade four – something Ms Hillier described as “hardly a ringing endorsement”.

“Learndirect have written to me welcoming the NAO and their team in to look at their books, so their books will be open to the NAO too as I understand it,” she went on.

“And we will no doubt consider whether we will invite them in as well and it’s likely to be in January so just to give you warning. I think, Mr Lauener, it will be your successor we have to invite.”

Mr Slater then jokingly encouraged her to “invite him back”.

Mr Lauener is due to retire from his post at the end of November, but insisted he would be “happy” to come back and face the committee.

“Oh, you shouldn’t have said that,” joked Mr Slater, the DfE’s most senior civil servant.

Mr Lauener added: “We considered very carefully what was the best thing to do. Our starting point with an Ofsted ‘inadequate’ expansion is the presumption what we would terminate the contract with three months’ notice.

“We’ve had 27 cases in the last two years, but in four of those, not counting Learndirect, we’ve terminated with more than three months’ notice – with between four and six months’ notice.”

Ofsted’s report on Learndirect was made known to the DfE in March, but was not published until August when the company failed in both a judicial review to quash the report and a gagging order to prevent FE Week from publishing the story.

The National Audit Office has opened an investigation into the affair, and how the government has handled it.

The provider’s chairman, Ken Hills, said the provider would fully comply with any investigation in a letter addressed to comptroller and auditor general, Sir Amyas Morse, dated September 14.

“I would welcome the NAO undertaking an investigation as a means of correcting gross reporting inaccuracies and establishing a clear evidence case for a more informed political and public debate around a complex issue,” he wrote.