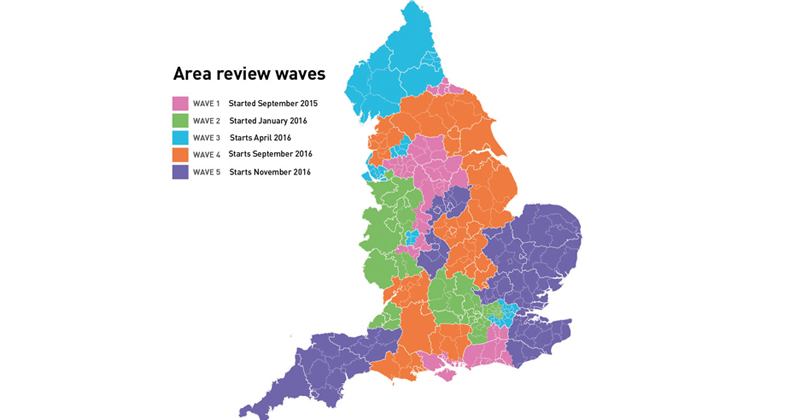 Reports into the final two waves of the area reviews of post-16 education and training have finally been published – bringing the process to a close almost two years after it began.

The 15 documents detailing the outcomes of the reviews in waves four and five of the process were made public today by the Department for Education.

Their publication came a little over four months after the final steering group meetings were held, and 23 months after the reviews began – and means the recommendations from all 33 reviews have now been made public.

The seven reviews in wave four ended with six firm recommendations for mergers, one of which – involving South Tyneside College and Tyne Metropolitan College – completed earlier this week.

Meanwhile, 10 mergers were recommended through the eight reviews in wave five, two of which have already gone through – Central College Nottingham and New College Nottingham officially joined forces in June, and Tresham College and Bedford College finalised their partnership on August 1.

But, as previously reported by FE Week, one of the wave five recommended mergers, involving Stanmore College and West Hertfordshire College, fell through just three months after it was proposed.

David Hughes, chief executive of the Association of Colleges, said the publication of the final reports “marks the formal end of a two year national stocktake involving every college in the country” which colleges had used to “consider their future strategies”.

He noted that there had been 33 mergers since the review started, and four sixth form colleges had converted to academies, and that “we expect to see another 15 to 20 mergers and 10 to 15 conversions in the next 18 months”.

“Area reviews are now complete but colleges still operate in an area where the rules and policies change at short notice, where funding is still being cut in real-terms, where margins and reserves are often alarmingly low and where competition often benefits no one,” he added.