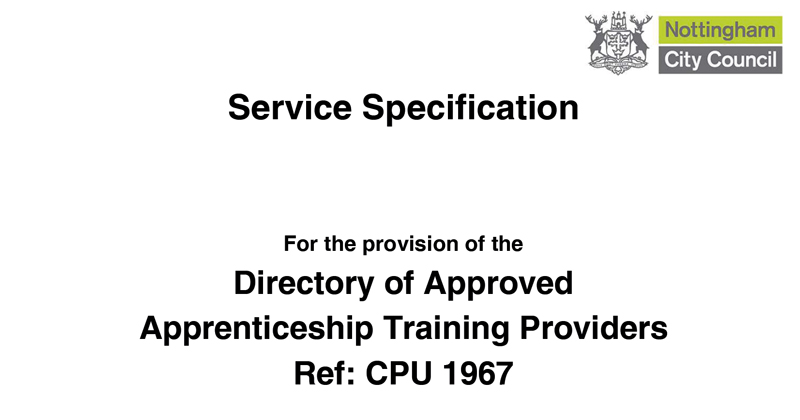 A local authority is planning to make hundreds of thousands in management fees by offering access to its own apprenticeship provider list, FE Week can reveal.

Nottingham City Council is currently tendering for apprenticeship providers to join its “directory” – a list that it intends to share with other public sector employers across England.

The list, it says, will include other local authorities, the emergency services and the NHS.

All business “transacted” through the directory, which claims to have stricter quality criteria than the Education and Skills Funding Agency’s free register of apprenticeship training providers, will be subject to a one-per-cent management fee.

But these figures are based on just 10 per cent of apprenticeships “in relevant employers across England” – so by the council’s own admission, management fee income could exceed £3 million per year.

A spokesperson for the council defended the charge, insisting that it had “an obligation to recover costs incurred in the management” of the directory “in line with well-established methods in the public sector”.

“This fee is intended to solely meet management costs, with any income generated covering the cost of setting up and maintaining the service,” he said.

FE Week reported in March on a similar set-up run by the NHS, prompting questions about whether such fees met strict ESFA rules.

The London Procurement Partnership manages apprenticeships for NHS organisations in the capital, and charges a one-per-cent management fee based on the value of the work it wins on behalf of providers.

And, in a separate case, NHS Shared Business Services, a national joint venture between the Department of Health and the information technology consultancy Sopra Steria, is charging providers 0.95 per cent on a quarterly basis for all apprenticeship business it secures.

A spokesperson for what was the SFA said at the time that, from May 1, “no government money can be used to pay brokers’ fees”.

The Nottingham council spokesperson insisted the charge was fully compliant with the rules.

“Our standard contract states that this management fee must only be paid from a legitimate source and never from government payments for apprenticeships funding,” he said.

FE Week has asked the ESFA to confirm that the charge complies with its rules, but has not yet had a response.

But Simon Ashworth, the chief policy officer at the Association of Employment and Learning Providers, expressed concerns about whether the charges – and the directory – were necessary.

“Employers and providers will decide for themselves whether they want to use this service, but we have serious doubts about whether taking funding away from frontline provision in the form of a management fee is justified given the approved provider and quality assurance systems which have already been introduced by the government under the reforms,” he told FE Week.

According to the tender, which runs until August 21, the directory will “consist of sufficiently experienced and qualified training providers who can deliver education services to apprentices employed by public body organisations in England”.

To be eligible to apply, providers must also be on RoATP – but must also meet higher quality standards.

These include the stipulation that providers have at least a grade two overall from a recent Ofsted inspection, and are not subject to intervention by the ESFA.

Successful training providers will be offered a two-year contract, during which time they must “maintain relevant registration with RoATP”.

The directory will “be available to local authorities and their maintained schools, police services, fire and rescue services and NHS services across England,” according to the tender.

The council spokesperson said the directory is designed to “save other public bodies facing budget pressures time and money by offering access to approved training providers which have already been procured through a rigorous process”.

He said the council recognised that providers had already been through a “rigorous process” to get onto RoATP, but insisted that its higher standards had been “aligned” with “strategic council plans”.