The Skills Funding Agency and the Education Funding Agency have both released their annual reports and accounts for 2016-17 today – their last before they merged to form a single agency on April 1.

Here are 10 interesting facts we learned through combing through both reports:

This is attributed to “a combination of the timing of area reviews and some underperformance in the sector”.

These figures are for all 37 reviews, plus two previous pilot reviews – whereas the EFA has only reported on the recommendations from the 22 published review reports.

In terms of cash to implement the recommendations, the SFA’s accounts show that £6 million in transition grants has been handed out to colleges, while £2,850,000 has already been allocated in loan funding from the restructuring facility.

The “declining financial health of the FE sector” is causing “greater demand for intervention and growing pressure for exceptional financial support”, which results in “an unfunded pressure on the adult education budget” – still a significant risk for the SFA.

“The increased provider funding error rate may be indicative of weak financial controls within the sector. If unchecked, and an upward trend in the error rate continues, this could limit assurance over the proper use of public funds that colleges and other training organisations receive,” said the SFA.

Analysis of the errors found “no single common factor” behind them, but noted that a “number of colleges were undergoing significant organisational change” which “places stretch across all college resources”.

But these errors were “not indicative of fraud”.

The number of FE colleges, local authority-maintained institutions, or specialist designated institutions being issued notices of concern has remained relatively stable – 58 in 2015/16 and 63 in 2016/17.

The chief executive of both agencies (now merged into the Education and Skills Funding Agency) received a salary of between £140-145,000 this year, as he did in 2015/16.

Nor is he the most highly paid director at the agencies.

The largest remuneration package across both agencies this year actually goes to Mike Green, the director of capital group at the EFA, who has a total package of £190-195,000.

This reduction is due to mergers, the report says, and also academisation, as the first SFC completed the process to become a 16 to 19 academy during 2016/17.

The EFA’s ‘early intervention and prevention’ approach, published July 2015, was designed to encourage early action where “it is evident that the sixth form college is close to triggering formal intervention thresholds”.

According to the EFA report, 30 SFCs were subject to the approach this year, while three financial notices to improve were also handed out along with one notice for an ‘inadequate’ Ofsted grade.

On average the amount of time that colleges and SFCs are spending in formal intervention has gone up this year and now stands at 95 weeks in 2016/17, compared with 82 in 2015/16. 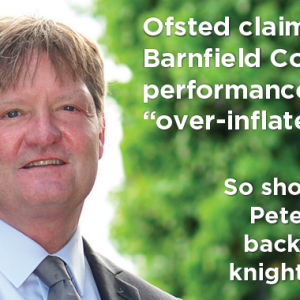