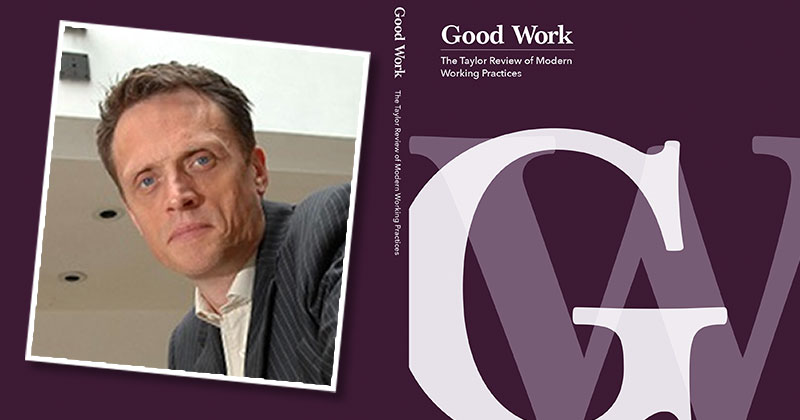 A hotly anticipated government review of employment practices is to call for apprenticeship and loan funding to be made available for “modules” and “flexible” courses, FE Week can reveal.

Matthew Taylor, the chief executive of the Royal Society of Arts, was asked by the prime minister to “develop proposals to improve the lives of this country’s citizens” through the workplace.

His final report is due out tomorrow, but FE Week has seen an advanced copy.

It raises concerns about the large numbers of “atypical workers” – particularly those from smaller businesses – who are missing out on state-supported training due to heavy policy focus on the apprenticeship levy.

Mr Taylor recommends that from 2020, which is the deadline the government set in 2015 to reach three million apprenticeship starts, the levy should be used for more flexible off-the-job training other than just apprenticeships.

The report stresses that “in-work learning is about more than apprenticeships”, and that employers regularly suggest in surveys that “modules of learning can be more valuable and flexible than full qualifications”.

“Following the delivery of the three million apprenticeships that it is committed to,” it adds, “the government should consider making the funding generated by the levy available for high-quality, off-the-job training other than apprenticeships.”

It does recognise the number of apprenticeships starts as “important”, but adds: “We should consider the total amount of training that employers do and who gets what training.”

The review, written with the help of a panel of experts, also finds that “concerns have been raised about ensuring sufficient public resources are available for apprenticeships and workplace training in small and medium-sized enterprises, and the impact the levy might have.

“SMEs are more likely to have workers in atypical employment arrangements, so it is important that there is sufficient focus on non-levy apprenticeships,” it says.

The levy is only paid by employers with a payroll of more than £3 million, and while training needs for such large employers is covered from that pot, concerns have been raised that training with smaller employers is being neglected.

FE Week reported in April on the “derisory” government funding providers will receive to deliver apprenticeships to non-levy payers between May and December, which left many providers fearing for their futures following cuts of more than 80 per cent compared with the previous year.

The panel heard concerns about “the inability of atypical workers to benefit from the apprenticeship levy, which is a key plank of the government’s skills policy”, because apprentices “have to be employed and commit to the programme for a minimum of 12 months”.

And “whilst there have been recent welcome changes to allow apprenticeships to be completed part-time, substantial issues remain”. For example, “apprenticeships are prescriptive about how the 20 per cent of off-the-job training requirement training may be delivered”.

The report also discusses the perceived lack of flexibility with FE loans, saying: “While work has become more flexible, too often learning and skills does not match this. For example, advanced learner loans, which require some people to take out university-style loans for training, are only open to full qualifications.

“Since their introduction, learning covered by these loans has fallen by one third and the budget has been consistently underspent”.

In addition, it warns that funding rules mean that someone who has worked for much of their working life, but who now needs to retrain, is unlikely to get much help or support.

Mr Taylor recommends that lessons should be learned from the “failings of Individual Learning Accounts”. This scheme was scrapped in 2001 after abuse by unscrupulous providers led to a reported £67 million fraud – with poor planning and risk management by the government cited as to blame.

However, the report claims: “The government should explore a new approach to learning accounts, perhaps with an initial focus on those with a long-working record, but who need to retrain and those in receipt of Universal Credit.”