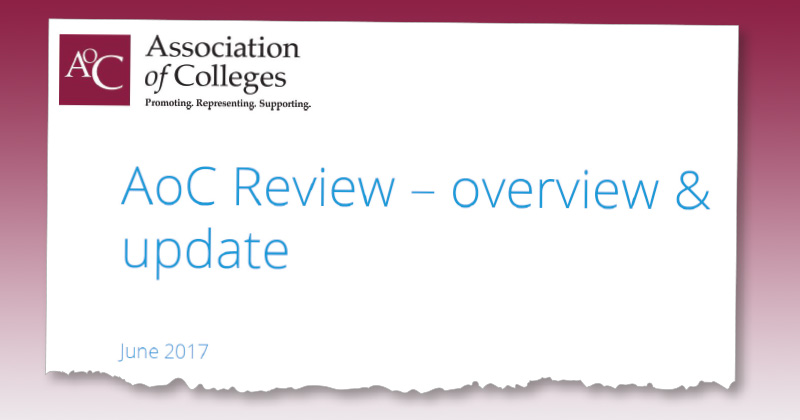 The Association of Colleges has approved restructuring plans designed to help prevent a £1 million overspend in 2017/18 – which include terminating long-running agreements with associate bodies to run three regional offices.

Word first emerged of a consultation on proposed changes in early February, when chief executive David Hughes discussed a revamp of membership fees, and said the current nine regional offices could be reduced to “five, maybe six”.

AoC has now reported back to its members on decisions made by board members, taking into account responses to the consultation.

The new structure will maintain nine regional networks of colleges, allowing principals, chairs, other senior staff to communicate within their own areas, with nine regional committees supporting the work.

But current arrangements with three third-party organisations – Emfec, the Association of Colleges in the Eastern Region, and the Association of South East Colleges – to run AoC’s east Midlands, eastern and south-east regions on its behalf, will be phased out.

There will also be a new staffing structure, with local support overseen by seven area directors.

“This will mean moving to a new relationship with ACER, AoSEC and Emfec and a transition plan to be agreed with each during 2017/18,” the report added.

The restructure will result in a lower headcount when it is completed, which will reduce costs overall

Paul Eeles, the chief executive of the Skills and Education Group, which oversees Emfec, told FE Week: “I can confirm that the relationship where Emfec ran the regional office for the AoC, for the last 17 years, will come to an end in the new year.

“It is one of those things that AoC has decided to change how it is doing things, but I’m quite pragmatic on this. Emfec will still have a bright future and we’re committed to maintaining a good working relationship with AoC.”

AoSEC boss Pam Lumsden said her organisation was working closely with AoC over a transition year to “maintain a high quality service for our members”.

“In due course, a decision will be taken by the AoSEC board about the future of the organisation,” she added.

Keith Middleton, operations manager at ACER, said his organisation was also looking to maintain the associate arrangement until next July.

Mr Hughes said the restructure would “align our staff and resources with the services and activities that our members want – to advocate on their behalf and provide local and specialist support”.

He added: “The restructure will result in a lower headcount when it is completed, which will reduce costs overall. This will allow AoC to continue to offer value for money fees for membership and in turn, to maintain very high levels of membership among eligible colleges.”

AoC insists that the changes are needed to help balance the books, because membership numbers will drop after forthcoming, wide-scale college mergers. AoC currently has 308 members.

The consultation document conceded that the current organisation was “not affordable” on its current fee levels, and “rolling forward as we are” would lead to a £1 million overspend on £6 million budget in 2017/18.

Board members have now agreed to reduce the “number of colleges within the membership fee cap to compensate for fewer and larger colleges due to merger”.

A plan to set subscriptions at 0.1 per cent of college-audited accounts has been cleared, with fees set for the next three years to “help with financial planning”.