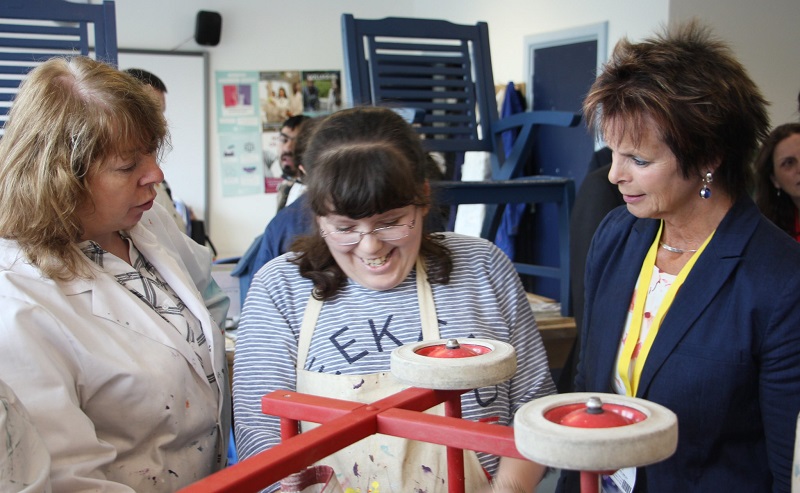 A college in the midst of completing a three-way merger was chosen by Anne Milton as her first FE provider to visit since she became skills minister.

During her maiden speech as skills minister last week at the Association of Employment and Learning Providers conference, Ms Milton insisted that she would “listen and take notice” of what the sector had to say. So far this is her visit to a provider.

She met with groups of apprentices, supported learners, and engaged in discussions with local businesses about their work to boost skills in the area.

She also spoke at length with principal Peter Mayhew-Smith about the college’s personable activities, including its merger, as well as the pressure FE colleges are finding themselves under currently with the sector-wide reforms being introduced such as T-levels and the apprenticeship levy.

Ms Milton said afterwards: “What a fantastic first visit and it was a great chance to meet apprentices in action.

“It was also good to see the college working so well with local businesses and the NHS who clearly understand what an apprentice can bring to the work they do.

“I would love to see more people thinking about becoming an apprentice to get the skills they need for a successful career – it’s a great way to earn while you learn.”

The minister took a tour of the college’s Technology, Engineering and Construction Centre with Mr Mayhew-Smith and met construction apprentices, and supported learners.

Speaking to FE Week after the visit, the principal of the grade three Ofsted-rated college, which was allocated over £3.7 million in government skills contracts as at March 2017, added that the minister was well-informed and very personable, “taking an interest in the work being done right around the college at every level”.

“Her questioning around our merger, the pressures we’re under and the optimism we’re trying to feel for qualification reform and the apprenticeship levy was accurate and insightful.

“She was very interested in how businesses are trying to respond to the various challenges around at the moment. I’m looking forward to seeing how she delivers.”

FE Week asked the Department for Education for details of what other visits to FE providers Ms Milton has lined up, but the department said it could not give out the minister’s diary ahead of time.

Has Ms Milton visited a college near you? If so, get in touch!