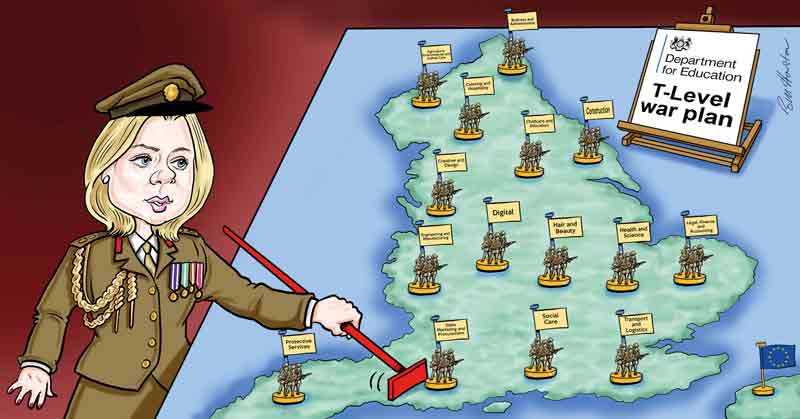 – Greening begs big business for help with “substantive” work placements, while DfE refuses to commit to original plan for 2019 launch

The education secretary has explained to FE Week how she’ll tackle the mammoth task of convincing huge numbers of employers to run three-month work placements for T-level learners.

In an exclusive interview with FE Week, she outlined plans to urge business groups to help deliver substantial work placements.

She also pleaded with employers to throw their support behind the “gold-standard” technical qualifications, which were first detailed a year ago by the government in its post-16 skills plan and are set to be introduced from 2019, during a speech at the British Chambers of Commerce Education summit.

The project, she said, would require a major commitment of time and resources from businesses across the country, as was explained in the Conservative Party’s general election manifesto, which stressed that the government would “make sure each student does a three-month work placement as part of their course” during their T-levels.

“Today was a clarion call to businesses to say ‘I need them to help us deliver this’,” she said, after her speech.

“Part of the work will involve talking to the big organisations like the BCC, the Confederation of British Industry, or the Federation of Small Businesses about how their members can help.

“But it’s why we really need this much broader push, it’s why we are going to follow up straight after the summer, getting our biggest and best companies into the DfE to have one plan on doing things like work placements, because they are critical.”

In the speech she told delegates that “I want to create an army of skilled young people for British business”, but, she said “I need your help: government can’t do it alone.”

Before she spoke, the Department for Education revealed plans to invest £50 million from April 2018 in “high-quality work placements” at T-Level, and £15 million “to contribute to improvements in FE so we have the colleges and teachers we need to deliver” the qualifications.

This will be the first instalment of the £500 million annual investment in T-Levels that was pledged during the budget in March.

Before that, however, it will be phased in, with the £65 million coming in April 2018, more than a year before any of the new courses are taught.

But when FE Week asked for detail, the DfE was unable to explain how this £65 million would be spent, or whether it would include financial incentives for the employers.

It is clear, though, that the DfE is desperate for help from firms not only to develop the content for the T-levels within the 15 vocational routes, but also to deliver “substantial work placements” that should last between one and three months (140 and 460 hours).

“I will bring together top leaders from the business community – to agree the overall shape of the reforms,” said Ms Greening during the speech.

“One of the main areas of focus will be the high-quality work placements that are a component of every T-level. These will help to prepare young people for skilled work. Our research shows they are beneficial to businesses, colleges and young people.

“I can’t do that important piece of work without you. I need your help again. T-levels will only work, only be successful, if we can deliver these work placements together.”

She also stressed her determination to help “every FE college” to be ready for “a streamlined set of just 15 technical skills routes”.

“Because we need to beat countries with the best technical education – we need to invest in more hours of skills training.”

Evidence is mounting that the government’s T-levels plan is already in trouble, amid desperate pleas from awarding bodies for a rethink on the “impossible” timetable.

According to the Skills Plan published July 2016, the first two pathfinder routes are meant to be ready for teaching from September 2019 – but this depends on reaching a number of milestones on time.

Panels of industry experts were meant to have begun meeting earlier this year to set out new occupational standards for each of the 15 routes.

The Department for Education advertised for panel members and chairs back in January – but has kept quiet since then on who has been appointed, or whether the panels have been going ahead as planned.

FE Week also understands that the DfE’s consultation on developing T-levels had been due in the summer, but has now been put back until the autumn.

Kirstie Donnelly, the managing director of City & Guilds, said the government had been “worryingly quiet” on the T-level timetable – and “with summer recess fast approaching we can only assume there will be no detail until the autumn”.

“This is a concern for those of us who need to develop the new qualifications as we are already faced with unrealistic timelines and any further delay means a successful outcome gets less and less likely,” she said.

Ms Donnelly urged new skills minister Anne Milton to “review what are simply unrealistic and impossible timelines” and to “listen to the experts who have experience of developing and delivering high-quality qualifications”.

Andy Walls, the head of vocational policy at the Joint Council for Qualifications, which represents the seven largest awarding bodies in the UK, said he was waiting “with interest” to hear from the DfE on its T-level proposals.

“JCQ and its member awarding bodies expressed our concern to the DfE that their original proposed timeline – with first teaching of new technical qualifications from September 2019 – was unrealistically tight,” he said.

“This could well be counterproductive to developing the high-quality qualifications that employers and learners need,” he warned.

Other important stages in the current timeline for T-levels include procurement for the new technical qualifications, which is due to begin in October 2018.

The first two pathfinder qualifications are scheduled to be approved by February 2019, with the teaching of these two routes beginning in September of that year.

Employers may already be experiencing work placement fatigue, before the government’s reforms to technical education have even kicked in, according to research commissioned by the Department for Education.

A report by the Learning and Work Institute, published on July 6, examined one of the central requirements of the new T-level qualifications – the introduction of a lengthy work placement for every learner.

T-Level work-placements are planned to be “substantial” and will last between one and three months (140 and 460 hours).

“The evidence suggests further investment will need to be made to increase providers’ capacity to successfully engage employers and boost the number and range of work placements offered to the levels described in the Skills Plan,” the report said.

However, “concerns were raised at the workshops that employers may already experience fatigue as a result of the number of requests they receive from learning providers, and that a more coordinated approach will be necessary to ensure this issue is not exacerbated”.

Justine Greening  recently committed £50 million from April 2018 to fund “high-quality work placements – a key component of every T-level – to help prepare young people for skilled work” during her speech at the British Chambers of Commerce education summit on July 6.

The issue of finding enough good work placements for all learners on T-levels is one that many across the sector have raised concerns about.

Difficulty is anticipated in persuading thousands of businesses around England to offer the placements, which are likely to require financial incentives.

Sufficient availability of local placements and travel costs – particularly in rural areas – could also be a major barrier for policy makers to overcome.

The LWI’s research was one of two projects commissioned by the DfE to look into the issues around work placements.

The institute, in partnership with workforce development body Fair Train, was charged with looking into what effective practice in work placements looks like and how it can be scaled up to the level required by T-levels, as well as identifying any challenges.

As well as calling for extra investment, it also recommended a “nationally mandated set of standards and guidance for implementation, moderation and assessment of work placements”, to ensure “a consistent approach across the country and ensure parity of learning for young people”.

The second project will be delivered by social cohesion charity The Challenge, and will focus on developing model work placement projects, based on research into existing good substantial work placements.

The contract for that work began on March 16, and is due to run until the end of July.

There was an especially notable absence from Justine Greening’s speech on the the technical education reforms: any reference to Institutes of Technology.

The institutes were first announced in July 2015, and mentioned again in the Skills Plan in July the following year.

At the time, they were intended to “provide technical education in STEM subjects at levels three, four and five”, in order to address the “particular need to improve higher-level STEM skills”.

But material on the next steps, originally expected last autumn, has so far failed to materialise.

Tantalising glimpses of the government’s thinking were revealed in the industrial strategy green paper in January – along with a commitment of £170 million in capital funding.

It suggested the aim was to “increase the provision of higher-level technical education”, and ensure that it is available “in all areas”.

A person “could study a level three at a local college, before moving on to study a higher-level technical qualification at an institute in a nearby city”.

The government would expect most of the IoTs “to grow out of high-quality provision”, according to the green paper – which meant they would be based at existing providers.

But a leaked document, seen by FE Week the following month, indicated that they could be based at “wholly new” institutions.

Amongst the suggested delivery and governance models were ideas such as “extending technical education provision from within an existing high-performing college”, “delivery through partnerships of FE and HE”, or “a group of employers partnering with an education provider to create an IoT”.

The Conservative Party manifesto, published in the run-up to June’s general election, caused more confusion by hinting at a change of policy on the institutes.

It committed to establishing an IoT in “every major city in England” – though these would be “linked to leading universities” and would “provide courses at degree level and above, specialising in technical disciplines, such as STEM, whilst also providing higher-level apprenticeships and bespoke courses for employers”.

Anyone hoping for clarification will have to wait some time, it appears.

In a written response, dated July 3, to a question from shadow education secretary Angela Rayner, skills minister Anne Milton said: “As part of our industrial strategy, we will launch a call for proposals to establish new Institutes of Technology later this year.

“The number of new institutions we approve will depend on the quality and number of bids we receive.”

As reported last week, the new Skills Minister Anne Milton is seen as a fixer, brought in to sort out the stumbling apprenticeship reforms.

And this week we have revealed how DfE plans for T-Levels appear in trouble, so its little wonder Ms Milton (who is also responsible for them) has already spent so much time with her civil servants.

Where the former minister Robert Halfon was keen to be out on the road visiting colleges, so far she has only toured one provider (Carshalton College) after 18 days in the job.

We understand Ms Milton is knee-deep in paperwork and civil servant briefings, rapidly getting up to speed on policy developments.

This bodes well for quick decision making, something the sector has sorely missed since Theresa May’s administration first took office a year ago.

It is clearly too early to judge if they will be good decisions, but decisiveness and clarity it badly needed.

And don’t think if apprenticeship and T-Level reform gets back on track, Ms Milton will have it easy.

Does anyone have the faintest idea how to implement devolution of the adult education budget from next year?