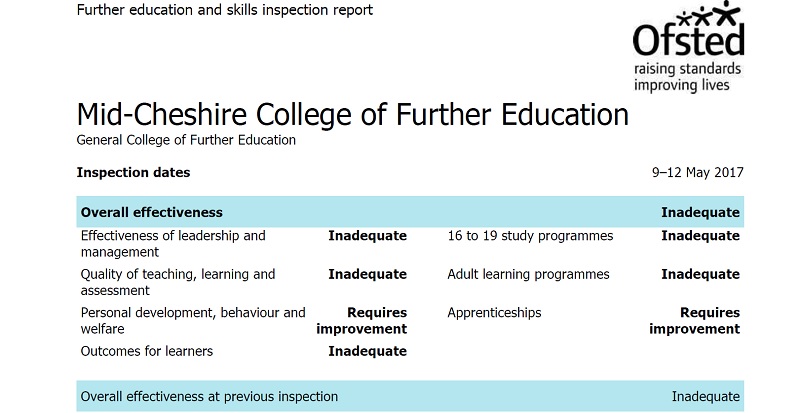 A former ‘outstanding’ college has been hit with a second consecutive ‘inadequate’ rating from Ofsted in just 15 months.

Mid-Cheshire College was slammed by the education watchdog in a report published last March, which plummeted the college from the highest to the lowest overall grade.

It followed a respite period of eight years from the inspectorate after being rated ‘outstanding’ in 2008.

But a new report published this morning has again lambasted the college’s performance.

Grade fours were given in five of the seven headline fields Ofsted judge.

Inspectors criticised governors and senior leaders who have “failed to improve areas identified as weak at the previous inspection”.

“Since the previous inspection the senior leadership team has frequently changed and very recently another new senior team has been appointed. High staff turnover and sickness have negatively affected students’ outcomes, which remain low and are below that of similar providers.”

Richard Hollywood stepped down as the college’s principal in June last year following the grade four.

Nichola Newton is described in the latest report as acting principal.

A financial notice of concern was delivered by the government last year, after the FE Commissioner said the college planning a merger with Warrington Collegiate was “now in a weak position” and it should “now seek a merger with a strong partner while there is time to do so” to survive.

But its proposed new partner, Warrington Collegiate, isn’t in a particularly strong position itself after it also received a financial notice of concern and received a ‘requires improvement’ judgement last February.

Today’s report on the 2,600-learner Mid-Cheshire College added that the quality of teaching, learning and assessment remains “inadequate”, and the quality of the apprenticeship provision “has declined”.

“Teachers’ expectations of what students and apprentices can achieve are still too low in too many subjects,” inspectors said.

The proportion of adults who achieve their qualifications has also declined since the previous inspection, Ofsted said, while the number of students and apprentices in the current year who have left their course without achieving their qualification is “too high”.

However, Ofsted did say that the college’s students and apprentices “develop their self-confidence well”, as well as the vocational skills they need for work.

Students and apprentices were also said to “behave well and are respectful” to each other and their teachers.

Ms Newton said the college was “absolutely determined to win back the confidence” of the local community.

“Their experience and skills are already being used to good effect as they work with colleagues at Mid Cheshire College to maximise learner outcomes this year.”