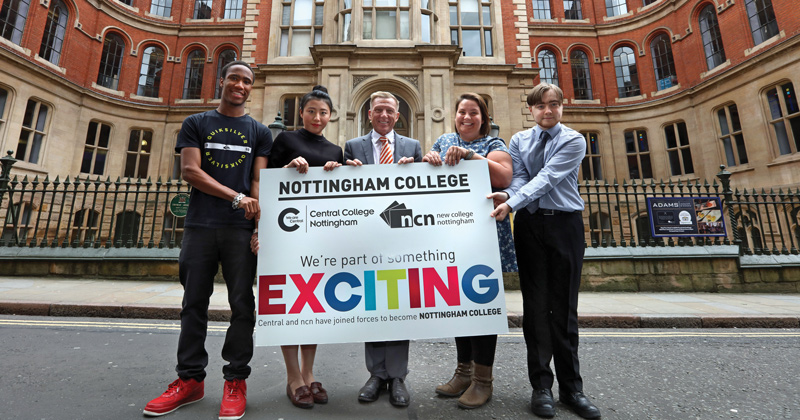 The creation of one of the largest colleges in the country in Nottingham has finally happened – 10 months after the merger was supposed to complete.

The new body is called Nottingham College, and is set to be one of the largest colleges in the country, in a merger that was originally supposed to complete on August 1 last year.

“Merging two colleges of this size is an extremely complex process, so we have had to deal with a mix of financial and legal processes including many partners and funders to ensure that everyone is on the same page at the same time,” said a spokesperson.

“While it has taken longer than we had hoped, we are now over the line and look forward to the journey to transition to Nottingham College.”

The new institution’s chief executive, John van de Laarschot, was full of enthusiasm for the merger on Thursday.

He said: “Today we begin a radical transformation of post-16 education in Nottingham.

“We have a unique opportunity to bring students and employers into a single, dynamic learning environment and I want to encourage employers, partners, parents and students to join us as we design a new and very different kind of college.

“We’ve already entered into discussions with representatives of local and national employers to make sure that the Nottingham College curriculum is designed around their needs for a sustainable and skilled workforce and we will continue to prioritise investment in areas of our business which support the region’s economic growth plans.”

With an estimated annual turnover of over £80 million, a spokesperson said Nottingham College expects to employ 1,500 staff and support up to 40,000 full and part-time students into employment, higher-level apprenticeships or degree courses.

She added that the agreement to merge followed “extensive public consultation last year, as well as subsequent discussions with staff, students, employers and the unions”.

The board of governors will be made up of four members from each of the two pre-merger boards, plus three independent members plus staff and student governors.

Carole Thorogood, designate chair of Nottingham College, said: “I wish to publicly acknowledge the contribution of colleagues and partner organisations who have worked tirelessly to bring this merger over the line.

“The guidance of the Education and Skills Funding Agency, and the partnerships forged with the D2N2 Local Enterprise Partnership, Barclays Bank and Nottingham City Council have been invaluable. But the really exciting work starts now.

“Nottingham College is being built on the very best that Central and NCN have to offer and I want to thank board members, staff, students and partners for their unwavering commitment to moving forward as one team.

“I am confident that our ultimate ambition to create one of the best colleges in the country is now underway.”