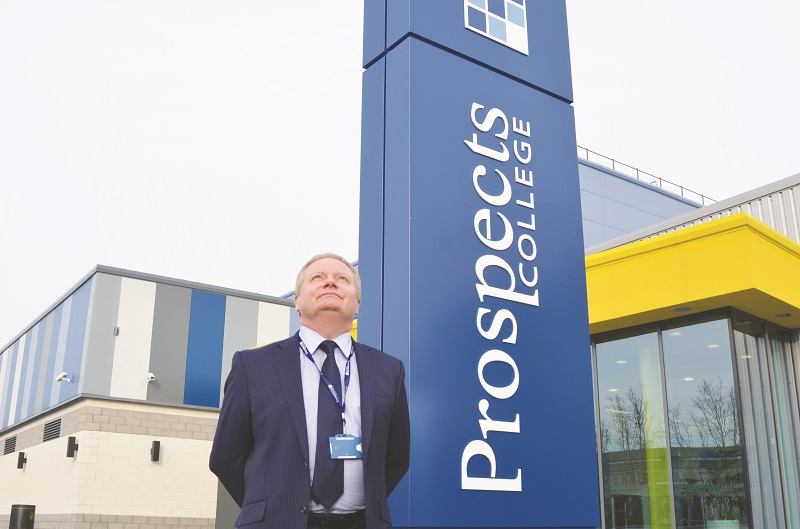 The principal of  Prospects College of Advanced Technology is set to retire, after guiding it through becoming the first new FE college in more than 20 years.

Neil Bates (pictured above) will step down at the end of this academic year and said today it has been an “enormous privilege” to have led the college for more than three decades.

Under his leadership, the Essex-based charity, formerly an independent training provider known as Prospects Learning Foundation, legally reclassified as an FE college back in 2014 – the first time this had been allowed by the government since 1993.

Speaking to FE Week about his decision to retire, Mr Bates said: “For me the most satisfying and rewarding part of the job has been witnessing how education and training transforms the life chances of young people often lifting them out of generational disadvantage and poverty.”

He added that while he has decided to step down from PROCAT, he is “certainly not retiring from the sector which I love”.

“I am going to have a holiday and a break to think about what I might do next,” he added.

In its first ever Ofsted report in February this year, Mr Bates led the college to a ‘good’ grade.

But questions were asked of the rating after the report’s publication was delayed by 90-days after its inspection – three times as long as the average 30 days between inspection and report being published.

Speaking today, Mr Bates also said: “We are at last seeing some recognition of the importance of technical professional education and we are rightly giving employers greater ownership of the skills system alongside an expectation that they will share the costs as well as the benefits of an investment in developing their workforce.

“My driving ambition is to make a difference and to champion technical professional education so that it has the status and prestige that it deserves.”

As well as leading PROCAT for the last three decades, Mr Bates has held a number of other roles both locally and nationally.

He was the founding chairman of the organisations that became the Association of Employment and Learning Providers and Group Training Associations England.

He was also the chair of the National Training Federation, vice chair of the Learning and Skills Improvement Service, chair of an Education Action Zone and a governor at a secondary school, a university technical college and a special school.

He is currently a board member of the Edge Foundation and recently chaired a yearlong commission of enquiry into innovation within the FE sector.

Mr Bates has also been an advisor to the government on the formation of Institutes of Technology.

David Sherlock, chair of PROCAT, said: “Neil’s departure at the end of September will mark the end of an era. He has been the seminal influence on the college’s direction and successful approach to employer-led learning.

“It is now up to us to honour that legacy by taking PROCAT to still greater international success in the new age of the levy and Brexit.”

A spokesperson for PROCAT told FE Week that plans are currently being drawn up to recruit a successor to Mr Bates and an announcement on this “will follow in due course”.