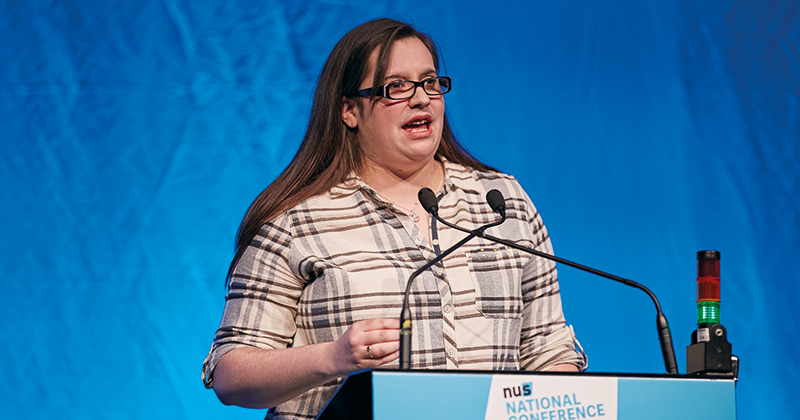 Emily Chapman has overcome depression and anxiety to be elected as the National Union of Students’ new FE champion, a poignant reminder that challenges like these don’t define who you are or what you can achieve.

The NUS’ newly minted vice-president for FE will take up the role in July, marking a complete turnaround from her darkest days, when she was afraid even to leave her room to attend college.

She was brave enough to speak frankly about her experiences during last week’s Mental Health Awareness Week, and the troubles she has conquered to reach this point suggest that, despite her modesty, she has the determination required to fill the space left by formidable predecessor Shakira Martin.

Emily was born in Edinburgh in July 1989, but her dad moved her to Blackwater in Hampshire when she was just 18 months old after her mum walked out on them. She was often cared for by her grandparents while her dad was at work as a credit controller. It was in this job that he met her step-mum, whom Emily says is still “always there” for her.

But life in this quiet country town was disrupted when she moved to Leeds aged 10, the year her half-sister Keri was born.

She had been used to hiding behind her dinner lady grandmother at school in Hampshire, but starting year six in Leeds was much tougher.

“I found school quite challenging. I was bullied from age five to 15 – more when I came up to Leeds because I was different.”

She describes herself as a “lanky cockney girl” at the time. “I also have quite a high testosterone level and so I have dark hair that is quite prominent,” she explains.

“I got things like ‘Tina Turner’ or ‘Chewbacca’. I really suffered from it quite badly.”

It was an incident at Pudsey Grangefield Secondary School that made Emily stand up for herself, when at age 14 a punch from another student almost broke her nose.

“It shook me into thinking ‘why am I letting this happen?’”

Her “saviour” at the time turned out to be rugby league. She learned how to play and referee and the sport soon boosted her confidence.

“After that, if people did start bullying me again I’d give them stick back,” she adds.

Joining both the student council and the school radio station were other ways to improve her self-esteem – and she soon became a media buff interested in politics.

“It was a way to be hidden but express yourself at the same time,” she says. Me with the SU mascot, SU the meerkat

This experience led her to study a BTEC national diploma in media studies at Leeds City College – but it was at this point in her life that “the wheels came off the wagon”.

Her dad and step-mum moved to Spain in 2006, but Emily was “stubborn” and decided to stay in England by herself at just 17.

Desperate to find a secure friendship group, she began going out drinking. “I ended up in quite a bad depression. It was a very bad time,” she says.

Between September and December of 2006 she stopped going into college and eventually couldn’t face going out at all.

“I physically couldn’t leave my room,” she explains. “I didn’t want to see the outside world.”

After Christmas with her parents she worked up the courage to go back into college in January, but to her horror found she had been expelled.

Rather than walk away, she explained what had gone wrong and luckily, the college gave her a second chance.

She had to report to a tutor every other day, and was set up in sheltered housing with a counsellor who visited every week.

With this support she achieved an amazing “distinction-merit-merit” result from her diploma.

“It shocked some of my family members; they thought I could only get Es and Fs,” Emily says.

A job on the checkout in Marks and Spencer’s for a year brought more stability. Then she applied for a media and sports studies degree, receiving an unconditional offer from the University of Stirling to start in 2008.

But the path ahead was obscured again when, four weeks before she was due to start university, she found out her parents were coming back to England and getting divorced.

“My family was in disarray at that point,” she says, admitting that the situation triggered struggles with socialising again.

“I was trying to buy my friendships. I kept borrowing money from payday loans, I didn’t pay my bills and I tried to get credit cards so I could keep spending money.”

Everything came to a head just a week before Christmas, when she was evicted after getting behind on her rent.

Emily chokes up as she explains having to call her dad to bail her out: “That broke my relationship with my dad quite badly. I’d let my family down on the money and I’d lied. I thought that I was being an adult and I could deal with it. I couldn’t. That whole scenario basically broke me.”

But despite feeling as though she had hit rock bottom, she found the determination to carry on.

I physically couldn’t leave my room

Just four months later, in April 2010, she found emergency council housing and a new job at Grosvenor Casino, back in Leeds.

“Work became my life. I thought ‘if I’m in work I’ll have money, and I have to have money to live’.”

After two and a half years she moved to a new job at security firm Golden Crown Management, but was battling with an anxiety disorder and regular panic attacks.

“If you’d said to me at that time in 2012 that I would go on to be the next VP for FE at the NUS I would have laughed at you. I didn’t want to be visible in any way,” she says.

The words of a close family friend, who was like an uncle to her, spurred Emily back into education when he passed away in February 2014.

“He always used to say to me, ‘this year is going to be your year, I can feel it my girl’,” she says.

“I used to laugh it off, but when he died it made me ask myself what I really wanted to do.”

She took the plunge and returned to Leeds City College to start a foundation degree in law and criminal studies.

“It was a great feeling,” she says.

At the college’s higher education fair Emily had her first encounter with the student union – when a rep unexpectedly introduced her to the president, Craig Clements. Craig became a mentor, helping Emily through a late diagnosis of dyslexia and partial dyspraxia at 25. Working with the union became a way to overcome her barriers, especially anxiety.

“I’m a lot better than I was. I’ve had a big group of people around me who support me. Shakira was one of them,” she says.

They have been working together since Emily became president of LCCSU in March 2015. And while it has been her “security blanket”, she is looking forward to moving on.

“Shakira and I are completely different people, but I’m really looking forward to working with her when she becomes the national president,” she enthuses.

“We can continue the growth of FE. I’ve got big shoes to fill – I don’t think anyone would disagree with me on that – but hopefully working with her I can do that.”

‘The Butterfly Lion’. I was with my family over the weekend and we were in Waterstones and I saw it for £7. I thought “I know this is a children’s book and I’m turning 28 in July but I don’t care, I’m buying it!”

I spend time with my family. I’m a very big dog lover so we’ve got quite a few dogs in my family and extended family. I enjoy going home and seeing my mum and the dogs.

I hate negativity. I’m bad for it myself but I don’t like this whole “we’re not going to do it, we think it’s going to fail before we start”. You have to be realistic but you should have some optimism at the same time.

I wanted to be a sports journalist. In essence I wanted to be [BBC reporter] Tanya Arnold, who does the rugby league sports show.

Who do you most admire, living or dead, and why? I admire anyone who has gone through bullying and come out the other side of it. It’s one of those things that people can really suffer with and it can harm them. The #BeKind project [an anti-bullying campaign] that ITV’s ‘This Morning’ show are doing at the moment is something that I’m very passionate about and would love to see more of, and I’ll pledge to do more with that. Bullying has got so many evil forms now.

I’ve got a circle of people I turn to. One of them is Craig Clements, the former president of LCCSU, who is basically my best friend now. Even though he hasn’t been president here for two years he hasn’t been very far away and I do speak to him every other day. If I’ve ever got a problem I can ring him. The other person would be my mum. If I need anything mum’s always there at the end of the phone – even if she doesn’t know what I’m talking about, which in terms of politics can happen quite often! She’s always there ready to let me rant and to listen. I turn to mum in crisis mode.

What is your most treasured possession and why?

I think it’s my Jemima Puddleduck toy. I’ve had it since I was a baby; it was given to me when I was born. It’s 27 years old with a floppy head because I used to hold her around the neck and never let her go! She’s always with me, even when I go away to national conferences I take her with me.