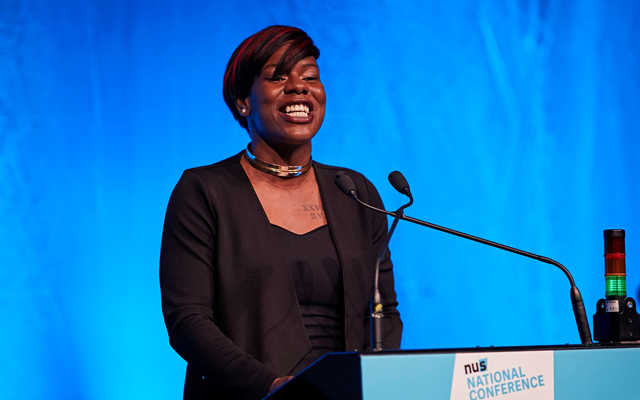 FE champion Shakira Martin [pictured above] has emerged victorious in the race to become the next president of the National Union of Students – and only the second to have attended an FE college.

The outgoing VP for FE beat incumbent Malia Bouattia and another challenger, Tom Harwood, in a stunning victory announced today at this year’s annual conference in Brighton.

She said: “I am honoured and humbled to have been elected as NUS’ National President. I take this as a vote of trust that our members believe I can lead our national movement to be the fighting and campaigning organisation we need it to be, representing the breadth of our diverse membership.

She referred directly to the sector in her acceptance speech, saying: “FE made me who I am today and look forward to sharing stories of just how powerful all forms of education can be when we’re all given access to it. During my term in office, I want to spend my time listening, learning and leading.”

Ms Martin has been a strong advocate for the learner and apprentice voice since being elected VP for FE in April 2015, when she was president of the student union at Lewisham Southwark College.

She beat her closest rival – Amy Smith from Sheffield College – by 141 votes to 55 votes at the national conference in Liverpool on April 22, 2015.

After taking over from former VP for FE Joe Vinson, Ms Martin was then re-elected for another term in April 2016.

She was uncontested for the post and won at stage one, with 152 votes compared to only 11 votes to re-open the nominations.

Results of the election to find Ms Martin’s successor will be announced later today.