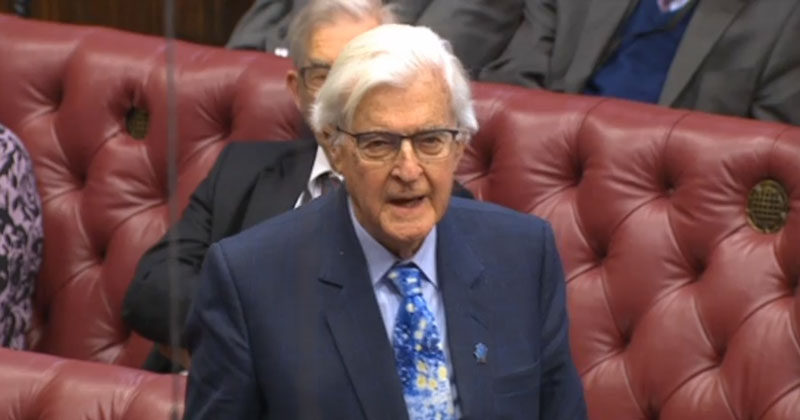 The Technical and Further Education Bill received final clearance from the House of Lords this afternoon, and it is expected to be granted royal assent within the next few days.

A major consequence of this will be the introduction of an insolvency regime for colleges, which could for the first time allow them to go bust.

It will also extend the remit of the Institute for Apprenticeships – most notably to cover technical education – and enshrine into law the right of FE providers to go into schools to promote vocational courses through an amendment introduced by Lord Baker [pictured above] and Baroness Morris.

Widely known as the ‘Baker clause’, this means schools will now have to ensure that a “range of education and training providers” can access pupils aged 13 to 18.

He said during today’s debate: “I think it’s generally agreed by both side that this is an important bill, it’s a beneficial bill, it’s a major step forward in improving the state of education in our country.

“We should speed it to the statute book.”

A further clause, given final clearance today by peers, outlined a duty for Ofsted to “comment on the careers guidance provided to relevant students at the institution” when inspecting FE providers.

But an amendment previously passed by the upper house, that would have seen child benefit extended to apprentices, was voted down in the Commons last week because it would “involve a charge on public funds”.

Gordon Marsden, shadow skills minister, told FE Week today that he was “quite angry that, as in so many other areas of FE, the words haven’t been matched by actions [with implementation of the bill], particularly on the issue of child benefit which still means that apprentices are treated as second-class citizens”.

There was further disappointment over Liberal Democrats’ education spokesperson Lord Storey’s move to protect future learners from being left with huge debts but no qualifications – a key aim of FE Week’s #SaveOurAdultEducation campaign.

The attempt through the bill to require FE providers to maintain contingency funds, to protect students incase they fold, was voted down by peers.

Mark Dawe, chief executive of the Association of Employment and Learning Providers, said it was “important to get this bill passed to give the IFA powers to sort out the standards and assessment issues as well as preparing to advise on the future funding bands”.

Stephen Evans, chief executive of the Learning and Work Institute, said the IfA now had “all the backing it needs to fulfil its important role in developing world class apprenticeships and technical education for learners and employers”.

The bill features provisions to apply an ‘education administration’ regime to insolvent FE and sixth form colleges, to put the interests of learners ahead of those of creditors.

When the proposals were first announced in March last year, the DfE said it would not provide financial support to failing colleges, following implementation of area review recommendations, and would instead allow them to go bust.

But its subsequent response to its consultation on developing an insolvency regime for colleges, published in October, indicated extra cash could be made available.

“The Secretary of State would of course want any special administration to be successful and will have wide powers to provide funding if necessary to achieve this,” it said.

The bill gives the IFA additional powers in its role of overseeing apprenticeships, and extends its remit to cover technical education.

The institute will be responsible for monitoring the 15 new ‘professional and technical’ routes with planned through the post-16 skills plan.

As reported by FE Week, the panel chairs for the 15 routes were announced by the IfA last week.