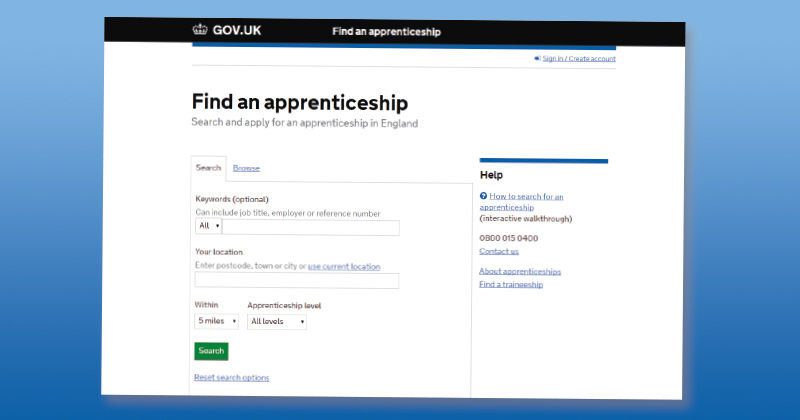 The minimum wage for apprentices changed on April 1 this year, soaring from a measly £3.40 per hour to a princely £3.50 per hour.

And though this extra cash – which represents an impressive 2.9% increase – is probably very welcome for young apprentices, we at FE Week started to wonder whether employers were paying attention, after the new rate came in without much fanfare.

So we set ourselves a challenge: could we find 15 job adverts on the government’s own apprenticeships portal advertising the wrong rate in 15 minutes? If we could, we reckoned that might constitute a problem.

In the end, a 15-minute scan on April 12 uncovered 11 separate apprenticeship adverts featuring illegal wages – not total endemic, but not statistically insignificant either.

We reported these to the providers, including Vision West Nottinghamshire College, which was listed as provider for seven of the adverts.

The other three providers affected were the London Hairdressing Apprenticeship Academy Limited, Bexleyheath-based Skills for Growth, and Walsall-based Performance Through People.

To be fair to them all, when we alerted them, they did quickly acknowledge and correct the errors.

We decided to take our findings to the labour market tsar Sir David Metcalf, who was appointed by the Department for Business, Energy and Industrial Strategy in January to help protect apprentices paid below the minimum wage.

We wanted to know what action he would be taking to crack down on employers who pay their apprentices illegal wages – and why these inaccurate adverts had been allowed on the site.

A spokesperson for Sir David at BEIS said he was still putting together a strategy for his priorities, and that it would be available in due course.

A spokesperson for the Department for Education said: “Employers are responsible for ensuring that their apprenticeship vacancies comply with the minimum wages,” we were told. “As soon as we become aware of any adverts which do not comply, we ensure these are taken down.”

As soon as we become aware of any adverts which do not comply, we ensure these are taken down

Employers not paying apprentices the minimum wage would “face the legal consequences”, she added.

Our little experiment came almost a year after a major survey on apprentice wages and training kicked off, with results long overdue.

Even though FE Week has learned that the final draft of the 2016 Apprenticeship Pay Survey was given to the government way back in January by the researchers who carried it out, its results have still not seen the light of day.

The survey, announced in May by the former Department for Business, Innovation and Skills, aimed to help the government monitor whether employers were paying the national minimum wage.

Interim “high-level” results were released in October as part of a report for the Low Pay Commission – indicating that the proportion of apprentices earning below the NMW had gone up – but the full findings are still under lock and key.

Mark Winterbotham, the director of the firm which carried out the survey, told FE Week that he didn’t know why it hadn’t yet been published.

He described the project as a “large scale survey of 9,422 apprentices, conducted by telephone from early June 2016 to the end of July 2016”.

He insisted that his organisation had handed the final drafts of the reports over to the government in January, but admitted he had “not had any communication since early March” with the research team at BEIS, which replaced BIS in July.

“They’d be the only ones able to say why it’s not been published yet,” he said.

But the government, asked this week when the report could be expected and what had caused the hold-up, would only say it would be published “in due course”.

The survey was described by BIS as an “important research project providing information on training, hours and pay from current apprentices”.

The survey findings were to be “used by government to help set pay policy generally and make improvements in apprenticeship training” and would “enable us to look at wage levels nationally, measure changes with previous years and monitor whether employers are adhering to the rules on fair pay”.

According to the Low Pay Commission’s report: “The 2016 survey shows that the vast majority (83 per cent) of apprentices, where an assessment can be made, are paid at or above the appropriate NMW rate” – suggesting that 17 per cent were not.

This is up from the 14 per cent found during the 2014 survey, which was based on telephone interviews with 9,367 apprentices.

In 2012, the Apprenticeship Pay Survey, which takes place every two years, found that 29 per cent of the 5,635 apprentices it interviewed were underpaid.