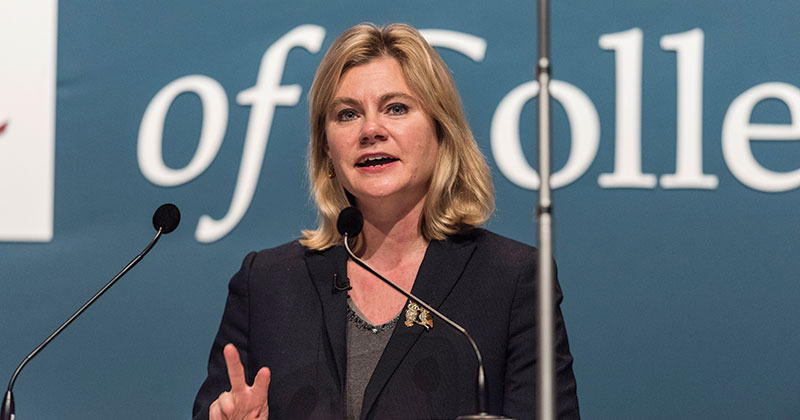 The government will make a major u-turn over the much-derided condition of funding rule, FE Week can reveal.

From August 2015 all 16 to 18-year-old students with a GCSE grade D have had to study and resit the GCSE as part of the condition of funding, rather than a functional skills qualification at level two. But once this policy has been scrapped, no student will be forced to resit GCSE English and maths.

The latest revelation follows scathing criticism of the policy from Ofsted in December, and publication of a letter from education secretary Justine Greening to Neil Carmichael, chair of the Education Select Committee, advising on changes to the numeric GCSE grading system.

The letter revealed very little new, but FE Week has been told by multiple sources that the current policy to force some students to resit GCSEs will be scrapped – so all students can study functional skills, as was the case before 2015. Although not mentioned in the letter, this will be confirmed in the funding guidance for 2017/18, due for publication shortly.

It comes just a few weeks after the government finally confirmed another u-turn on the requirements for early years educator apprenticeships. Currently early years learners must achieve at least a grade C in English and maths GCSE to pass the level three course, but FE Week reported in early March that from April this will be broadened to include functional skills.

Reflecting on the latest news of an end to forced GCSE resits, Association of Employment and Learning Providers boss Mark Dawe told FE Week: “If there is going to be a U-turn on this, then we welcome it.”

He added: “The new chief inspector for Ofsted has quite rightly joined many stakeholders in the FE and skills sector and employers, in raising the possibility of the policy being abandoned altogether, and we feel that Ms Greening could have responded to this challenge more positively [in the letter].

“Young people without good grades should be encouraged to carry on learning the core subjects, but with the option of doing so via functional skills.”

Ofsted was highly critical of forced resits in its 2016 annual report published in December, as reported in FE Week.

It said: “While the policy’s intention to improve literacy and numeracy levels is well intentioned, the implementation of the policy is not having the desired impact in practice.

“Inspection evidence shows that, for some students, having to retake their GCSE can be demotivating and that attendance at these lessons is lower.

“For many students, an alternative level two qualification may be a more appropriate means of improving their English and mathematics and ensuring that they are ready for work.”

Commenting today on Ms Greening’s letter, Catherine Sezen, senior policy manager at the Association of Colleges, said it was useful to “finally have clarity” over the new GCSE grading.

“This will give guidance to colleges on entry requirements and GCSE resit policy and to universities and employers for their entry and job role requirements,” she said.

Ms Greening said in the letter that “under the new system, a grade four and above will be equivalent to a C and above.

“Where employers, FE providers and universities currently accept a grade C we would expect them to continue recognising a grade four.”

She previously gave strong hints about a change of heart towards the English and maths resit policy, at last November’s AoC conference (pictured).

As reported in FE Week, she told delegates that students must not be spending “time running upwards against a brick wall that they’re not going to get over.”

Apprenticeships and skills minister Robert Halfon also conceded to delegates that GCSEs are not always the best option for FE students.

“It is clear that we need a credible, high-quality option for students for whom GCSEs are not appropriate or achievable,” Mr Halfon said.

“This is why we are reforming Functional Skills to make sure that they are genuinely relevant to employers, and consequently have credibility and prestige in the jobs market.”