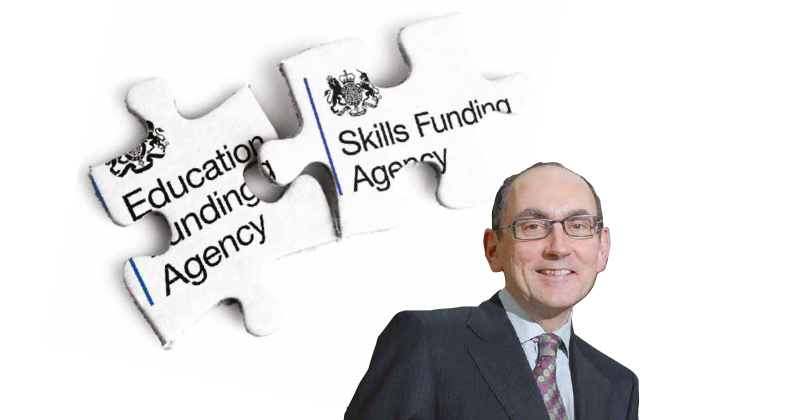 The Skills and Education Funding Agencies are merging and Peter Lauener is stepping down as boss of both, the government has just confirmed.

The moves, which FE Week exclusively revealed would be happening back on March 3, have been announced online by the Department for Education.

The new, single body – to be called the Education and Skills Funding Agency – will sit within the DfE and begin to operate from April.

Current chief executive of both agencies, Mr Lauener (pictured above), has announced that he intends to retire following the merger and plans to recruit a successor at the new agency are under way. He will also stand aside as shadow chief executive of the Institute for Apprenticeships, once a permanent replacement has been found.

A DfE spokesperson said: “Mr Lauener will carry on as chief executive of the Education and Skills Funding Agency until a permanent replacement has been recruited and is in place.”

Education Secretary Justine Greening said: “Creating the Education and Skills Funding Agency will mean we are able to provide a more joined-up approach to funding and regulation of schools, colleges and other providers, with improved accountability and better service.

“We will be working closely with our staff, unions, stakeholders and the education sector to finalise and deliver our plans for the new agency.”

The EFA previously managed funding for 16 to 19 provision, while the SFA financed training for older learners. The merger to a single agency, which will also cover the management of school building programmes, has been broadly welcomed by FE sector leaders who hope it will help cut out confusion and duplication that previously existed between the two agencies.

But the timing of the move, before huge administrative changes coming with the April apprenticeship levy launch, has also caused consternation – with concern expressed that skills and adult education could now drop down the list of priorities at a merged agency also focused on schools. Former top skills civil servant Dr Sue Pember, who is now director of policy at adult learning provider membership body Holex, told FE Week: “It was inevitable that the ‎SFA and EFA would merge and is the right way forward for managing 16-19 funding.

“However, there is a risk that adult funding will be marginalised and lose focus. It is important that the new chief executive prioritises and re-energises the work on the adult education budget, including creating the right framework for devolution.”

She added: “Peter has been a wise and secure leader of funding. He holds the corporate funding policy memory and will be hard to replace.” Former SFA provider services director David Hughes, now chief executive of the Association of Colleges, said: “Merging the EFA and SFA provides the perfect opportunity to simplify the system and make it more efficient and cost-effective.

“The reality is though that the two agencies have been operating as a shared service for two years so we don’t expect colleges to see much difference.

“We are keen to work with DfE and the newly-merged organisation to address some of the overlaps, inconsistencies and differences between regulations, rules and policies which have grown up across the old EFA and SFA divide. Streamlining some of the rules will help students, some will save money.”

Commenting on the chief executive of EFA and SFA stepping down, he added: “I would like this opportunity to thank Peter Lauener for his work at EFA and SFA. He has always been a true champion for FE .”

Another former senior skills civil servant Mark Dawe, now chief executive of the Association of Employment and Learning Providers, also told FE Week: “The merger makes a great deal of sense particularly for providers delivering apprenticeships and traineeships for both 16 to 18 year olds and adults.

“All of us have to make sure however that FE and skills are not overwhelmed by the combined agency dealing with the challenges faced by the school sector.” He added: “Our sector is indebted to Peter [Lauener] for many years of uninterrupted service and dedication to working with providers and colleges, to transform the working lives of thousands of people across England though education and training.” The DfE announced that Mr Lauener had been appointed shadow chief executive of the IfA, the new policing body for reformed apprenticeships, last September.

The IfA will play a key role in policing the development of new standards, as well as the quality assurance of apprenticeship assessments, once widespread reforms come into effect from May.

Stephen Evans, chief executive of Learning and Work Institute, told FE Week: “Merging the two funding agencies makes sense, and I hope the transition to a single organisation will be seamless for providers and learners.

“We hope this is the first step in a much needed simplification of the learning and skills system – we look forward to clarification of next steps and clear delineation between the responsibilities of different bodies so providers, employers and individuals know who is responsible for what.”

Reflecting on Mr Lauener’s departure, he added: “Leading two major public funding bodies at a time of such significant change in education and skills, not to mention also establishing the IfA, would have been unenviable challenges for three chief executives.

“Peter Lauener has successfully steered the sector through political and financial turbulence and has done so expertly.”

Mr Lauener reflected on the possibility of an SFA and EFA merger during an interview with FE Week editor Nick Linford in February last year, saying at the time he was trying to put the question “to one side”, although he accepted that “at some point we may come back to question of whether there should be a merged agency”.

He had already overseen significant moves to share workloads between the SFA and EFA.

Previous comings-together between the agencies have so far come via a joint area review delivery unit and intervention team.

The SFA press office effectively ceased to exist last July, when ownership for older FE learners passed from the former Department for Business Innovation and Skills to the DfE, which already spoke for the EFA.