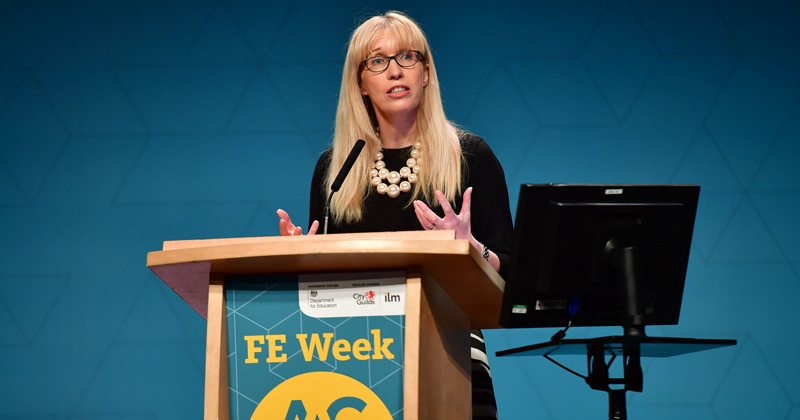 Ofqual’s chief regulator has said it’s “not irresponsible” for apprenticeships to be launched without an organisation in place to deliver the final exam.

Speaking at FE Week’s Annual Apprenticeship Conference this morning (March 24), Sally Collier (pictured above) also said she “didn’t know” if having just half of approved standards with end point assessment organisation in place was enough.

“No, I don’t think the DfE is irresponsible,” the exams watchdog boss said in response to a question from host Kirsty Wark.

“I think in an ideal world you’d have all the pieces in place before you launch the thing,” she conceded.

But she insisted that the lack of an assessor in place to carry out the final apprenticeship exams wasn’t an issue.

When questioned about there being assessors in place for just 50 per cent of approved standards, Ms Collier said: “I don’t know if that’s enough or not.”

Ms Collier compared the lack of an end point assessment organisation to a learner starting GCSEs without knowing which exam board would be assessing them.

Ms Collier, who was appointed chief regulator in April 2016, also said that apprenticeships did “not necessarily” need to include qualifications.

“What is important is what employers want,” she said.

“The Institute for Apprenticeships will have a role to say, are the apprentices getting what they want?” she continued.

“It’s my job to say, if there is a qualification, we can regulate it.”

By the end of January just over half – 81 out of 159 – standards approved for delivery had at least one assessment organisation in place.

But the proportion of learners on standards without an approved assessment organisation has been dropping rapidly, from 42 per cent in July to 18 per cent in October.

Former top civil servant Sue Pember said in October that it was “diabolical” to allow apprentices to start on a standard without details of the final exam in place.