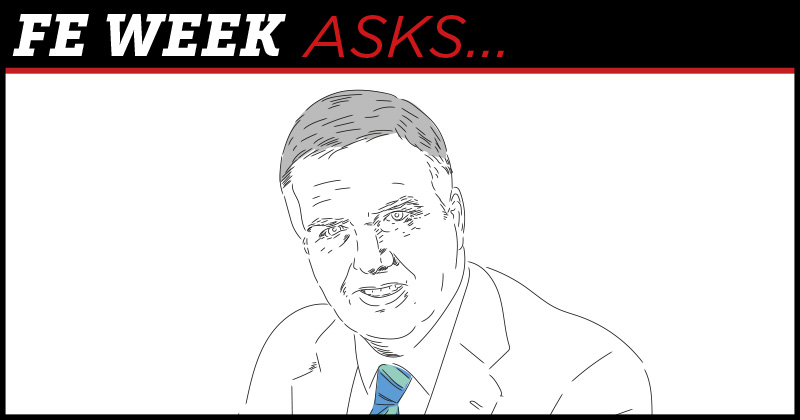 Richard Atkins has had a very busy four months since he was confirmed as the new FE Commissioner. FE Week’s Jude Burke caught up with him this week, for an exclusive interview on his progress in the demanding role, at the AoC’s Governors Summit

With the area review process and college interventions occupying so much of his time, it’s perhaps unsurprising that the FE commissioner’s speech at the AoC summit was just his second public address to the sector since taking on the role.

Richard Atkins told the audience of college governors that he expected there to be “50-ish” mergers as a result of the area reviews – a substantially lower figure than the 80 predicted by his predecessor Sir David Collins last summer.

But when I caught up with the former Exeter College principal after the event, he insisted that the reviews – which are due to finish at the end of March – had still been a “big success”.

“I think area reviews have changed the landscape,” he told me.

“Before this, local authorities, colleges and local enterprise partnerships were not sitting round the same table and now nearly every area has agreed to a strategic group to do that,” he said.

I think area reviews have changed the landscape

The “deeper understanding” that local authorities and LEPs now have of “the scale of the college sector and the contribution it makes to their communities” is another key benefit to have emerged from the process, he said.

Colleges have also learnt a “huge amount” about what their neighbours are doing, he said, and are now more willing to collaborate with each other.

“Before the area review what other colleges in your area were doing was all rumour and speculation, and sometimes malicious rumour,” he said.
“This has put real numbers on the table, confidentially, and they’ve all shared them.”

Nonetheless, it’s hard to ignore the fact that a process that was intended to create “fewer, often larger, more resilient” providers has resulted in a smaller-than-predicted number of mergers.

But he insisted he wasn’t disappointed about this lack of change; from his own experience of being a principal, he said appreciated “autonomy”.

He did sound a note of caution about those colleges that have opted to remain standalone on the basis of “over-optimistic forecasts”, particularly around student numbers.

Some colleges were “too optimistic on 16-to18, some apprenticeships, some HE numbers,” he said.

Those that don’t “will find their finances sorely stressed”, he warned.

I want to be held accountable

Consequently there were likely to be further mergers announced in the future “for some years to come”, although at a slower pace than currently.

On the subject of his intervention work with failing colleges, and the lack of published reports, Mr Atkins told delegates that there had been 60 interventions so far, with 28 providers currently in intervention and 32 having come out the other side of the process.

He told me that since he took over the job, there had been “four or five – maybe half a dozen” new interventions.

For all of those, “there will be a report published”, he told me.

He also acknowledged that there had been “a gap” in publishing reports for a while, which he suggested had been due to “the change in government department”.

The same governmental processes were also responsible for the delay in publishing the 2015/16 FE commissioner’s annual report, and also a letter Mr Atkins had written to all colleges in January – neither of which have so far seen the light of day, he said.

“But I think we’ve put four intervention reports out in the past two weeks, and I think there are two or three more at least in the pipeline quite soon, and we will keep a regular supply,” he said, adding: “I want to be held accountable.”