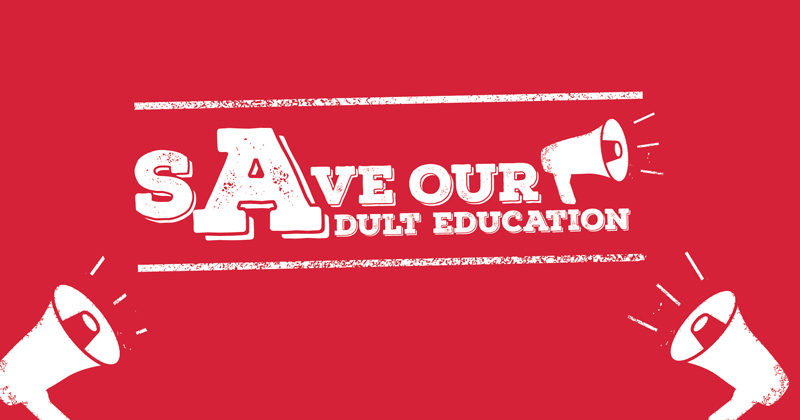 FE Week is calling on the government to make three key policy changes to #SaveOurAdultEducation as part of a massive new campaign.

First of all, we want to introduce FE maintenance grant loans for adult learners, which would make retraining possible for many more older people, by helping cover their living costs while studying, something that is already available to mature students in higher education.

The government has currently left the sector in limbo on the issue.

Shadow skills minister Gordon Marsden, who will be speaking at the campaign’s parliamentary launch on February 27, alongside the minister himself Robert Halfon, said that extending maintenance loans would be a major step “towards achieving parity of esteem and treatment for adult FE learners”.

The campaign also wants the government to consult on a proper adult education strategy, one that does not disappear under the political weight of apprenticeships and devolution.

Another speaker at Monday’s launch, Sue Pember, who is a former top skills civil servant and now leads local authority community learning membership body HOLEX, said: “This is a very timely campaign that should be supported by all who care about adult education. We need a lifelong adult education strategy.”

The third and final demand is to write off advanced learning loans debt, which leaves blameless adult learners unable to complete their course if their training provider goes bust.

This problem is particularly timely, after FE Week last month revealed that the Skills Funding Agency was investigating the demise of John Frank Training.

One of these, Asim Shaheen, 49, who was unable to complete a level three hospitality and catering course which he had funded with a loan for over £8,000, told FE Week: “It’s all wrong. My loan should be squashed, if I haven’t got any qualifications to show for it. I’ve been left completely in the lurch.”

David Lammy, an MP who was minister for skills in 2007 and 2008, and who has recently called for a return to widespread “night schools”, has thrown his weight behind #SaveOurAdultEducation.

“It’s more important than ever that this issue of adult training is grasped,” he told FE Week. Reflecting on the loans issue, he added: “We have got to find a way to give adults the funds to train and retrain throughout their working lives – to a large extent at night schools – both through subsidies and loans where needed.”

Mr Halfon has committed to boosting retraining opportunities for people already in work, in a written response to a letter signed by 60 MPs that backed growing calls to widen the focus of FE policy away from apprenticeships and younger learners.

The letter, sent in mid-January, whose signatories included shadow education secretary Angela Rayner and Mr Lammy, warned that a rethink on retraining for older people was needed to bridge a “gaping skills gap”.

Mr Halfon said in response: “I fully recognise the points your letter makes about the need to address those skills shortages, creating new opportunities in particular for those people who are already in the workforce.

“That is a key theme of our developing industrial strategy.”

The industrial strategy released on January 23 acknowledged a “growing challenge” with training for older people, and committed to exploring “ambitious new approaches to encouraging lifelong learning”.