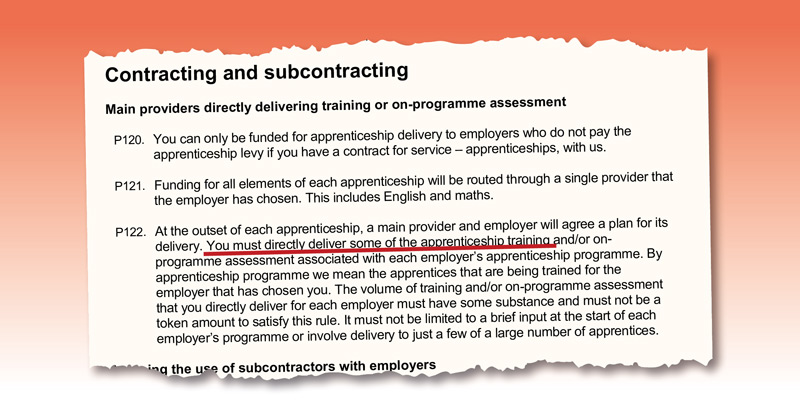 Colleges are using the new subcontracting rules to regain some of the ground lost to independent training providers accused of nicking their lunch, FE Week can reveal.

Just a third of apprenticeship funding is currently allocated to colleges – and a significant proportion of that is actually delivered by independent training providers acting as subcontractors.

The problem has become so severe that the former skills minister Nick Boles warned colleges in 2015 that they should not let ITPs “nick your lunch” over apprenticeships.

But new rules coming into force in May mean that lead providers will soon need to “directly deliver” at least some of the training or assessment of each apprenticeship programme – and the government stresses that this must “not be a token amount”.

The change is being seen as “an enormous opportunity to expand apprenticeship provision”, according to Andrew Martin, the deputy principal of West Nottinghamshire College, which has the largest apprenticeship allocation from the Skills Funding Agency of any college.

Why on earth are you letting these guys [ITPs] nick your lunch?

The college subcontracted 82.4 per cent of its apprenticeship provision in 2015/16, which earned it £3.2 million in topslicing fees from provision worth £15.5 million.

However, he added that “new delivery models are already emerging” which “will still require a sub-contracting relationship”.

The rules state that “the volume of training and/or on-programme assessment that you directly deliver for each employer must have some substance and must not be a token amount to satisfy this rule.”

All subcontracting arrangements must now be agreed with the employer before the start of an apprenticeship programme.

Speaking at the Association of Colleges annual conference in November 2015, he urged colleges to move from delivering one third of all apprenticeships to two thirds.

“As your friend, I have to ask you this, why on earth are you letting these guys [ITPs] nick your lunch?” he asked.

A Freedom of Information request published by the AELP in June 2016 revealed the scale of apprenticeship subcontracting by colleges.

The FOI, based on SFA data, showed that 40 per cent (62,240 out of 157,290) of all apprenticeship starts contracted through FE colleges in 2014/15 were actually delivered by ITPs as subcontractors.

All lead providers are required to publish a list of subcontractors, the value of any subcontract, and the management fees retained they have retained.

A top-slice fee of around 15 to 20 per cent of the contract value is typical for many lead providers – income that is now at risk due to the new rules.

But Teresa Frith, senior skills policy manager at the AoC, said the new rule would not stop colleges from subcontracting.

“What it will do is stop those main and subcontractors who see apprenticeships as an income stream, with little serious thought given to providing quality education and training,” she said.

“The needs of the apprentice and the employer must be the priority for both the provider and the subcontractor.”

The college subcontracted 80 per cent of its apprenticeship provision in 2015/16.

A spokesperson for Hull College, another major subcontractor, said it was also looking to continue to farm out part of its provision.

The college is “working closely with partners to ensure any future delivery within a partnership model meets the criteria clearly set out by the SFA”, according to its spokesperson.

And a representative for Central College Nottingham said it had “developed a five-year plan going forward to reduce our subcontracting activity and work with partners in other ways”.

FE Week has repeatedly reported on the issue of subcontracting – and the large management fees charged by lead providers – since our first edition in 2011.

One of the worst offenders is Sheffield-based provider Learndirect, which retained almost £20 million in management fees from its 64 subcontractors in 2015/16 – amounting to 36 per cent of its £55.3 million SFA funding.

A Learndirect spokesperson said: “We expect our engagement with subcontractors to reduce as our primary approach is to directly deliver apprenticeship services to these employers.”

The impact of the new subcontracting rule is likely to be felt most keenly at West Nottinghamshire College.

It has the largest apprenticeship allocation from the SFA of any college – but the majority of its provision is delivered by subcontractors.

According to figures published on its website, the college subcontracted provision worth more than £15 million in 2015/16 – representing 82.4 per cent of its apprenticeship provision.

These deals earned the college £3.2 million in management fees.

Andrew Martin, its deputy principal, acknowledged that the new rules would “reduce the value of subcontracted provision over the course of the 2017/18 year and beyond, as many high-quality training providers who previously subcontracted choose to work directly with employers”.

He pointed out that “new delivery models are already emerging”, and that these would “still require a subcontracting relationship” with “training providers and colleges working in partnership to best meet employers needs for quality apprenticeship delivery”.

He added: “We see the reforms as an enormous opportunity to expand apprenticeship provision through West Nottinghamshire College to improve workforce skills, whether this is through traditional direct delivery or by working together with our outstanding range of training-provider partners.” Eastleigh College has the second largest adult apprenticeship allocation of any college – but also subcontracts the majority of this provision.

Eastleigh’s published subcontracting fees for 2015/16 show that it subcontracted provision worth £15 million, retaining management fees of £3.4 million – although it’s not clear how much of this was for apprenticeships.

A spokesperson told FE Week that 80 per cent of its apprenticeship provision for that year was delivered by subcontractors.

Its principal Jan Edrich said the college “welcomes the opportunity to deliver some provision directly to apprentices within its subcontracting arrangements”.

She indicated that the college still saw subcontracting as part of its apprenticeships programme.

“The college has had a strong partnership relationship with its subcontractors for many, many years and sees the new requirement as a further way of enhancing the way it works with them,” she said.

“The apprenticeship programmes being developed to meet the new requirement bring together the strengths of each partner for the benefit of the learner.”

Learndirect: Engagement with subcontractors to fall

Learndirect – which keeps hitting FE Week headlines due to its soaring top-slicing fees – has said it will deliver more apprenticeships itself.

Latest figures published in November showed it retained almost £20 million (around 36 per cent) in subcontracting management fees from total funding worth £55 million.

The provider has now said it expects “our engagement with subcontractors to reduce as our primary approach is to directly deliver apprenticeship services to these employers, but recognise that should the partnership require it we will explore other delivery options, which could include an element of subcontracting”.