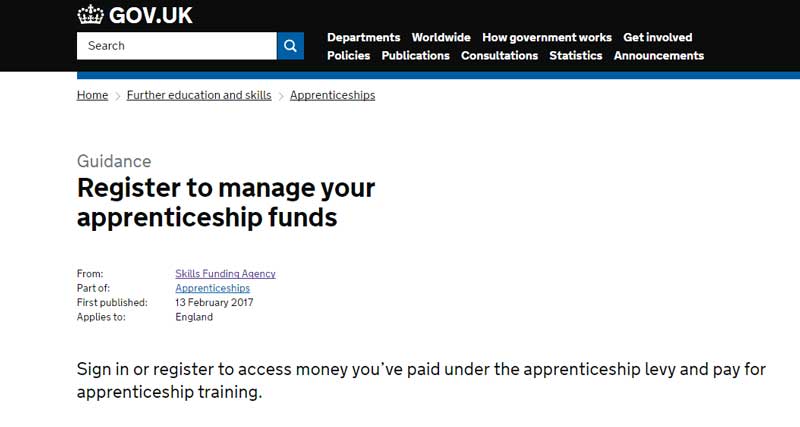 The online system that employers will use to manage apprenticeship funds is now open for registration to all levy-paying companies.

All employers who have to pay the new charge from May, with an annual pay bill of at least £3 million, must register for the new system.

It will allow them to manage the financial side of their apprenticeship system, estimate their spend and recruit apprentices through their training provider.

According to an email from the Department for Education, the new name was a “clear favourite with employers”.

Robert Halfon, apprenticeships and skills minister, said: “Our funding reforms are essential to ensuring that this country works to build a highly skilled workforce for the future.

“Nobody understands the skills employers need better than the employers themselves and that is why we are placing them in the driving seat, to ensure they get the talent they need to grow.

“I have tried the new service myself and am impressed with how easy to use it is. All you need to do is set up an account, so I encourage employers to do it now so they can be ready for the levy coming later in this year.”

“Employers have told us that they want to be in control of their apprenticeship programme and funding. They want to manage it quickly and easily, so we have designed the apprenticeship service to do just that.

“It’s really quick to set up an account, and employers that have already registered during our testing phase have told us how easy they found it.”

In order to set up their account, employers will need to have details of their Government Gateway login details for the PAYE schemes they want to include in the account, as well as details of all organisations that will be making an agreement with a training provider for apprenticeship training.

Employers will also need to work out how much apprenticeship levy they are due to pay, and report this to HMRC for the funds to be credited to their accounts.

As outlined in the new guidance, all employers will receive a £15,000 allowance to offset against the levy.

This means only businesses with a paybill of more than £3m will pay.