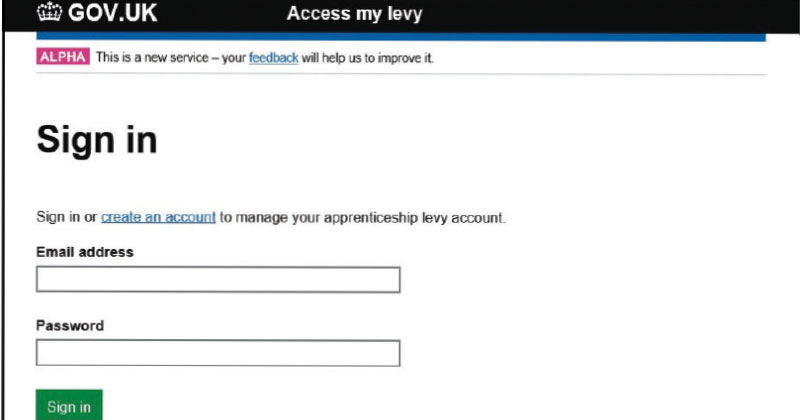 The new Digital Apprenticeship Service is ploughing ahead, and all levy-paying employers will be able to register next month.

Having been given a thorough “private beta assessment” by the Government Digital Service, the online service, which lets levy-payers access their accounts and make payments online, has been cleared for use, the Department for Education has said.

The next step, a DfE spokesperson told FE Week, will be to invite “some employers” to register on the system “over coming weeks”.

She said: “We will work with these employers to continue testing and improving the service, before we invite all levy-paying employers to register in February 2017.”

It is understood that levy-payers will be able to set up accounts on the DAS, choose the types of apprenticeships they want to run, the number of apprentices they take on, and appropriate training providers.

The levy will only be paid by businesses with a payroll of more than £3 million, which represents less than two per cent of employers in the country. The money will be ring-fenced, so it can only be spent on training apprentices.

Gary Tucker, DAS’ service manager, explained the rigorous process his team went through to make sure it would meet employers’ needs before handing it over to GDS in a blog in December.

“Over the past three months, the service has been thoroughly tested from end to end by 100 employers and their provider partners.”

This testing covered, for example, registration, the process of “adding an apprentice to reflect the agreement between the employer and the provider”, and “submitting provider data to evidence training and trigger payments”.

FE Week revealed last October that the government expected to spend at least £12.5 million on delivering the DAS.

This would cover the costs both to the Skills Funding Agency and to suppliers of services such as web development and user research.

Sector leaders will be hoping the new service is more successful than the SFA’s FE Choices website, which was shut down in October 2015 after just three and a half years in operation.

The website performed one of the DAS’ functions in allowing users to compare the performance of providers – though this was aimed towards the public, rather than as a service specifically for employers.

An FE Week exclusive six months after it launched in January 2012 revealed that only 6,230 people had accessed it. Our Freedom of Information inquiry also revealed that FE Choices had cost the taxpayer over £2.3 million.

The website itself had cost £630,000 to build, with the remaining £1.7 million spent on gathering and producing of data.

The high cost was picked up on by Private Eye, which asked whether FE Choices “may be one of the most expensively pointless government websites yet”.