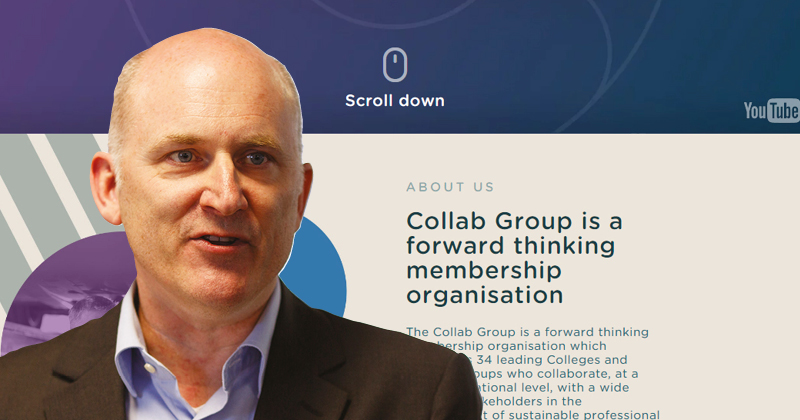 Ofsted does not “paint a complete picture” of success, according to a group of colleges which has just absorbed an institution with a grade three rating.

The Collab Group announced on November 21 that South Essex College had become its 34th member, the first in the group’s history to be allowed to join with a ‘requires improvement’ rating.

The organisation, formerly known as the 157 Group, enacted a change in its membership criteria to allow this in January, overseen by chief executive Ian Pretty (pictured).

South Essex was featured in FE Week two weeks ago, given the dubious honour of being the lowest scoring college in the 2015/16 FE Choices survey into student satisfaction.

Its principal Angela O’Donoghue said she was “thrilled” to join Collab, as “the group really does represent the best of the sector”.

The old membership rules, made under Mr Pretty’s predecessor Dr Sedgmore, explicitly invoked Ofsted ratings, including an “honourable agreement” among members that they would “voluntarily leave” if served with a grade four.

All previous members were a grade one or two when they joined.

But FE Week analysis of the group’s 30 English members has shown that while Collab currently has five grade one members, none have been rated ‘outstanding’ since the common inspection framework was launched in September.

It has 15 grade two colleges, nine grade threes, and a one grade four – Ealing, Hammersmith and West London College, which was allowed to stay on after receiving the rating last December.

Looking only at Ofsted reports published under the new CIF, of the 13 members inspected, 10 had seen their grade fall (see table below).

Asked about the basis on which its website describes members as “leading colleges”, a Collab spokesperson said: “We do not believe Ofsted paints a complete picture of the success of a college.

“We have widened our basket of measures of success and quality.

“Collab Group colleges have a variety of attributes; they are large and diverse, technically and professionally focused, and they have ambitious apprenticeship schemes.

“They are entrepreneurial and employer-facing with great engagement with local businesses.

“Crucially, they prepare their students for successful careers and help get them into work.”

FE Week exclusively revealed in January the group’s ambitious plans to expand from the total of 26 members it had at that point, following its strategic review.

Mr Pretty, who had taken the reins there seven months earlier, and whose previous roles included senior roles at HMRC, the Cabinet Office and Capgemini, claimed at the time that up to 15 colleges had shown an interest in joining.

When asked about membership criteria, he said at the time: “A set of new attributes have been agreed to assess any future requests from a college to join.”

But, he added: “Ofsted grades one and two are regarded as successful, but ‘inadequate’ is not; there are other factors to be taken into account.

“There are a number of indicators of success that could be considered, for example if a college has been given a Beacon Award or impressive success rates.”

FE Week’s National Index of Colleges also excludes Ofsted grades, as some were awarded many years ago.

Ofsted is due to publish its annual state of the nation report next Thursday, but has not yet commented on Collab’s remarks.