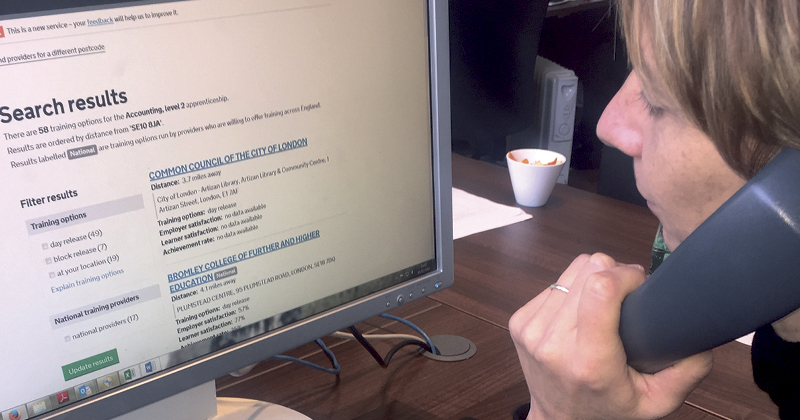 Last month, the government launched its directory of apprenticeship training providers, part of the raft of reforms coming in time for the introduction of the levy in May.

Despite being lumbered with a seriously unsexy name, ‘Find Apprenticeship Training’ has been bigged up as the one-stop shop for any employer, large or small, which finds themselves wanting to take on apprentices.

Now as luck would have it, FE Week has recently found itself in the market for an apprentice of its own. We’ve been very happy with our PA to the Managing Director and finance assistant Victoria, and with both parties keen to kick her career onwards, we want to get her on the path towards becoming an accountant. So what better way to test this much ballyhooed new site, and see how well the system is working.

On first glance, it’s a smooth but rather sparse site, but we couldn’t fault it for ease of use. With just a couple of clicks, our postcode and the keyword ‘accountancy’, we were offered a grand total of 58 providers offering a level two qualification in our area, a mixture of colleges, independent providers and local authorities. They were listed according to what they’d submitted to the government’s course directory, and relevant information – including contact details and employer and learner satisfaction – was very easy to find.

So far so good – but it was after we started dealing with providers that our troubles began. We tasked our finance director Helen (pictured) with getting in touch with the first 12 providers on the list – seven colleges, four ITPs, and the City of London local authority. Now bear in mind that we are literally specialists in apprenticeships, so if we’re having difficulties, imagine what it’s like for Bob SME’s first foray into taking one. So of these 12 providers, we found just one college gave us a positive first impression, and three of the ITPs.

The City of London didn’t even pick up the phone – for the number listed on the government site designed to match providers with employers. Some of the colleges took our details but gave precious little info up front, others simply told us that they weren’t taking on new candidates until next year, while one friendly receptionist put us through to an answer machine. It was only Newham College which impressed, offering to come and meet us and talk us through our options.

The ITPs were a lot better, honestly, aside from the one which erroneously informed us the apprenticeship wouldn’t be funded if our candidate was older than 24. The others happily gave us information on the phone and were prompt with their follow-ups.

This glimpse of the landscape – a small sample of providers working within one of the more popular frameworks – confirms a lot of what we’ve seen in the sector lately. Too many colleges are disorganised or complacent, while ITPs, which are run more like business, tend to be more eager to take on employers as customers. As for the local authority… the less said the better.

We’ve yet to pick a provider for Victoria’s journey, and while we’re confident this online directory will help us find a good one, it’s a bit of a shame that so many of the candidates still need to get their acts together.