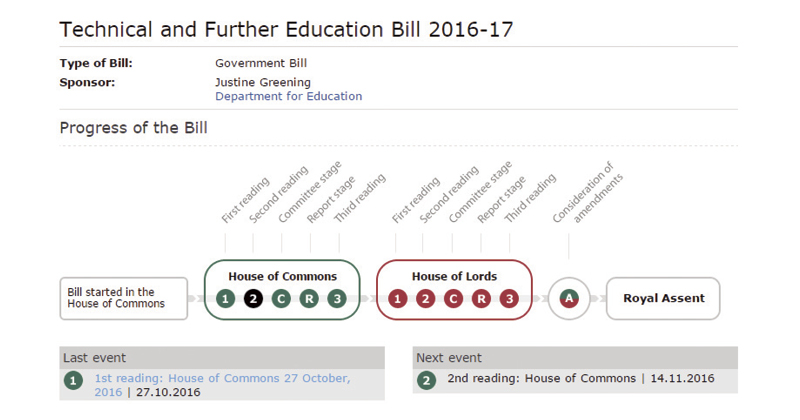 The new Technical and Further Education Bill will have its second reading in the House of Commons today.

It sets out proposals for a new insolvency regime for FE colleges, and includes plans to extend the role of the Institute for Apprenticeships, the new vocational training policing body.

According to the Department for Education’s factsheet on the bill, its aim is to “take forward the government’s reforms to technical education, which will help boost the country’s productivity by addressing skill shortages and ensuring high quality technical education”.

The first reading of the bill took place on October 27.

On October 27, FE Week reported details of the bill’s proposals for a new insolvency regime.

The new system will carry the objective of minimising disruption to students’ work if their college is affected.

A DfE spokesperson said at the time that the new regime, which follows a consultation launched in July, will address the “current absence of any provisions for college insolvency, giving creditors certainty for the first time about how their claims will be dealt with”.

This week Angela Rayner criticised the bill, arguing that the government should be investing more in FE – instead of than creating a system that makes it easier for colleges to go bust.

The legislation also includes a provision to rename the Institute for Apprenticeships to include ‘Technical Education’ in its title – to highlight its role in monitoring the 15 new ‘professional and technical’ routes introduced in the government’s Post-16 Skills Plan.

The first hint that the Institute would be expanding came in the Skills Plan, which said: “We will bring forward legislation in this session of parliament that will expand the remit of the Institute for Apprenticeships to encompass all technical education.

“It will become the Institute for Apprenticeships and Technical Education.”

The white paper accepted a series of recommendations made by the Independent Panel on Technical Education headed by Lord Sainsbury.

In his foreword to the Skills Plan, the former skills minister Nick Boles acknowledged the impact of the work of the Sainsbury review.

He said: “We accept and will implement all of the Sainsbury panel’s proposals, unequivocally where that is possible within current budget constraints.

“We want to ensure there is a strong and stable network of colleges and other training providers, and want to take this chance to put in place wider changes to the system, including reforms to accountability, funding, and careers education and guidance.”

Lord Sainsbury will be speaking at 4.15pm on the first day of this year’s Association of Colleges conference taking place from November 15 to 17 at the ICC in Birmingham.