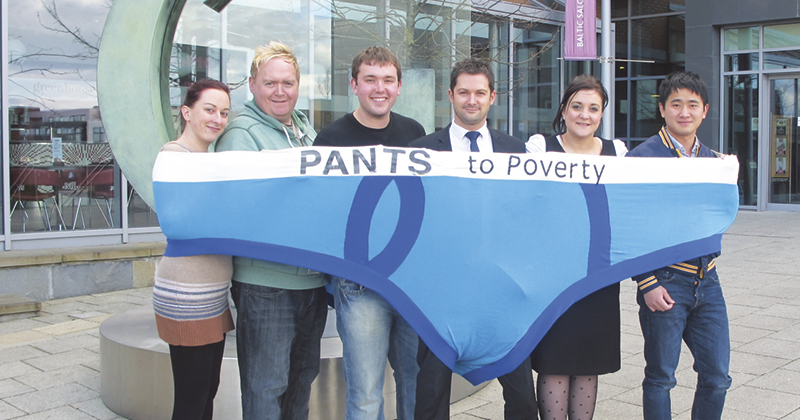 The company that the Gazelle Colleges Group employed to run a competition to help teach young people entrepreneurial skills has been dissolved.

The challenge encouraged college students across the country to work on business projects that involved designing, marketing and selling custom-made underwear between 2012 and 2015.

In its first year, the challenge involved 15 colleges, and over 250 students designed Olympics-themed pants.

It is claimed that more than 100,000 students engaged with the competition over the three years it ran, but according to Companies House, Pants to Poverty was dissolved on October 11 this year.

Pants to Poverty Ltd was launched in the Make Poverty History youth movement in 2005, as an ethical fashion company selling underwear made of Fair Trade cotton.

It claimed to support 5,000 farmers in India, and students that won the company’s entrepreneurial challenge were given the opportunity to visit the country to live and work with the farmers and factory workers who made the underwear they had sold.

Ramsden via LinkedIn had received no response at the time of going to press.

However, in describing the ‘Pantrepreneur Challenge’ on his LinkedIn page, Mr Ramsden wrote: “With crushing government cuts in the FE sector, the programme was put on hold after three fabulous years.”

There are also questions surrounding the current membership of the Gazelle College Group.

Of the 11 members currently listed on its website, only five would confirm that they are still members and have no intention of ending their membership.

Two colleges said they have left the group, one is in the process of leaving, one refused to say either way – and the final two didn’t respond.