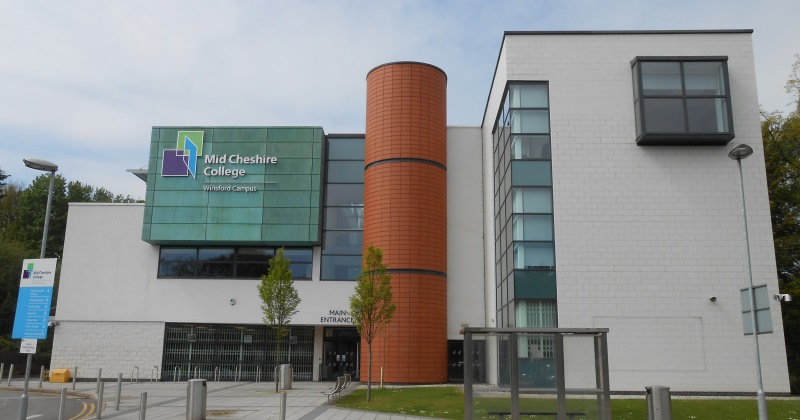 A college that nose-dived from ‘outstanding’ to ‘inadequate’ in March has been slammed by Ofsted again for making insufficient progress.

Following its second monitoring visit since the education watchdog’s damning report, Mid-Cheshire College was deemed to have made ‘insufficient progress’ in improving the quality of teaching, learning and assessment and with ensuring learners make good progress and achieve their potential.

The report said that while improvements had been made by learners in a number of areas including GCSE English, public services, and information and communication technology, achievement rates had fallen further “in many other areas” in 2015/16.

The report said: “Too few learners achieved their qualifications on diploma courses and level two courses, and achievement rates were too low in many subject areas including health and social care, science and mathematics, construction, engineering, and hairdressing.”

This, Ofsted said, was down to “poor-quality” teaching, learning and assessment and some teachers’ low expectations of what learners can achieve.

It added: “As a result, a culture of low expectations persists in the college.”

Despite leaders and managers taking action to improve the quality of teaching, learning and assessment at the college, such as appointing mentors to support underperforming teachers, these actions were found to have had “insufficient impact on the quality of provision”.

Ofsted found that “too much teaching, learning and assessment is still weak” at Mid-Cheshire, “too many lessons lack purpose”, and “teachers too often use unchallenging and inappropriate activities”.

Some students were said to have, “poor attitudes to their learning”, while other lacked proper additional support.

Mid-Cheshire’s performance management process has been “delivered with increased rigour” since the last inspection, but this “resulted in a number of the weakest teachers leaving the college”.

Other teachers were not improving fast enough, and therefore were having a negative impact on their students.

Ofsted said the senior leadership team had “taken action to improve learners’ attitudes to their study and their readiness for work” and also “improved the learning environment in many areas”.

But while leaders and managers had worked to be more visible around the college and challenge learners to be punctual, the report said “these actions have not yet improved all aspects of behaviour sufficiently”.

Areas where the college was found to have made reasonable progress included: a re-written post-inspection action plan after the first monitoring visit, to include specific actions for improvement; “is well advanced” plans to ensure that all learners carry out a placement in 2016/17; and leaders and managers introducing an improved system for gathering and analysing data at the college.

Finally, leaders and managers were said to have improved safeguarding arrangements, meaning safeguarding is now effective.

The report into the FE commissioner’s intervention at the college, published last week but dated April, pulled no punches about its problems, describing the leadership at Mid-Cheshire as “dysfunctional”.

Mid-Cheshire College was part of the Cheshire and Warrington area review in wave two, which is now completed.

One of the outcomes was for a four-way merger involving Mid-Cheshire, West Cheshire, South Cheshire and Warrington colleges.

In early September, FE Week reported that consultation had opened on the first phase of this merger, between West Cheshire and South Cheshire.

Mid-Cheshire is expected to join them in August next year.