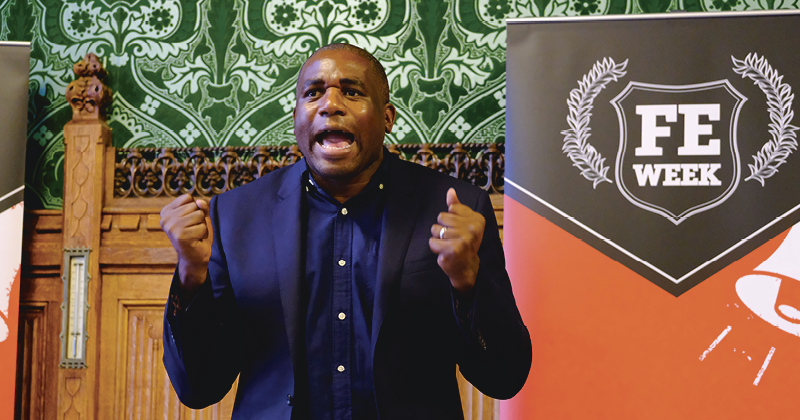 A backbench House of Commons debate has been called for by David Lammy MP over drastic funding cuts exposed by FE Week, which inspired our #SaveOurApprenticeships campaign.

Mr Lammy (pictured above) has applied to the Backbench Business Committee to hold a three hour debate based on the findings of FE Week’s exclusive analysis, which showed that funding for 16- to 18-year-olds in some of the most deprived areas of the country could be slashed by up to 50 per cent.

The committee meets every Tuesday at 2:30pm to consider representations from members for debates in backbench time, and Mr Lammy tweeted details of his application this morning ahead of the hearing over his application.

Other members who have put themselves forward to speak, if the debate is approved, include Neil Carmichael, chair of the Education Select Committee, Meg Hillier, chair of the Public Accounts Committee, and former shadow education minister Nic Dakin.

Mr Lammy said in his tweet that there were “serious questions” for the government to answer on the issue.

The motion for the debate made a point of noting “the vital role that apprenticeships play in equipping young people with the skills they need”, and welcomed “the Government’s commitment to social mobility.

However, it expressed regret that “the Skills Funding Agency’s proposed funding rates for apprenticeships from May 1, 2017, equate to cuts of around 30 per cent on average” and “that these cuts rise to around 50 per cent for those apprentices living in the most deprived areas”.

It called for a reversal of the cuts because they “directly contradict the Government’s commitment to social mobility and will jeopardise the Government’s plan to create 3 million apprenticeships by 2020”.

The application for the debate follows a letter written by Mr Lammy to apprenticeships and skills minister Robert Halfon in early September, calling on the government to reverse the funding cuts.

The letter, which was motivated by FE Week’s research, was co-signed by 50 members of parliament.

Then, on September 14, the FE Week #SaveOurApprenticeships campaign against the devastating cuts was launched at the Houses of Parliament to a packed gathering of sector leaders and senior politicians.

Mr Lammy delivered a rousing speech at the launch, and responded to Theresa May’s comments from Prime Minister’s Questions, which she said she did not recognise the situation in apprenticeship funding.

He said: “It’s an absolute scandal for the PM to say she doesn’t recognise the figures. It’s her funding agency, they’re her figures.

“They are launching a two-tier system. If you are 16 to 18 in Tottenham, if you live in poorer areas, you will get a very different product indeed from those living in the leafy shires.”

He also insisted “we will force a U-turn.”

Gordon Marsden, the shadow HE and FE minister, who hosted the event, warned that the cuts are “an elephant trap in his [Mr Halfon’s] in-tray”.

The campaign was also repeatedly name-checked during Commons education questions yesterday, by Mr Marsden who called the funding plans a “shambles”.

Apprenticeships and skills minister Robert Halfon replied: “We’ve been saving two and a half million people on apprenticeships over the past five years.

“If that’s not saving apprentices, I don’t know what is.”

Update: Mr Lammy put his case for the backbench debate to the Backbench Business Committee shortly after 2.30pm.

He was thanked by members for the application and told a decision will be made on whether or not to hold the debate in due course.