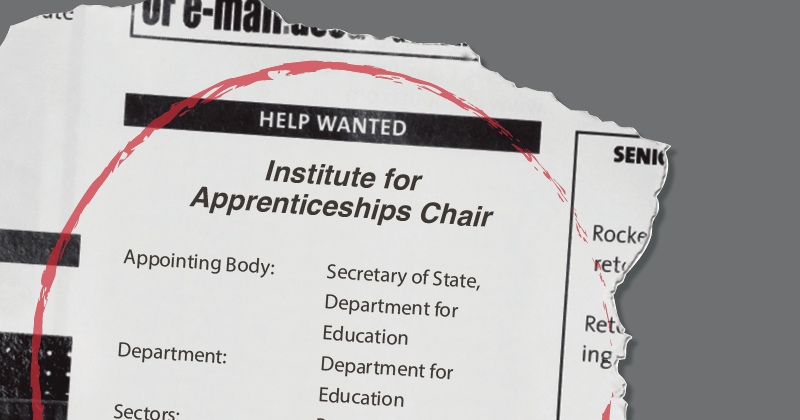 The hunt is on for the first permanent chair of the Institute for Apprenticeships, while potential candidates have been served notice that they should be prepared to adapt to changing ministerial whims.

An online notice posted by the Cabinet Office confirms that the role will involve two days a week work, and pay £56,000 a year, with interviews set to be carried out in November.

It stressed that the chair will be expected to provide strategic leadership and direction on the role and the scope of the IfA, which will have an estimated annual budget of £8m until 2020, before it becomes fully operational next April.

Applicants were also warned that the new leader of the body, which will police apprenticeships, will have to think quickly on their feet.

“The operation of the Institute will need to be flexible enough to accommodate potential future asks from ministers, while retaining focus on existing functions,” the advert said.

“This is a relationship with which the board is likely to be unfamiliar and successful handling of it will be key to the organisation’s success.”

Appointments are expected to last up to five years, with the possibility of reappointment.

It is understood that the selection panel will be made up of Sir Peter Spencer, a public appointments assessor, Juliet Chua, the director-general of the DfE’s Education

Any final decision will, however, lie with the education secretary Justine Greening.

According to the advert, the IfA will act as “the ultimate decision-maker on approving apprenticeship standards and assessment plans”, and will have the power to determine maximum funding levels. It also warned that it’s likely the Institute “will be charged with other tasks over time”.

“In particular, Lord Sainsbury published in April 2016 an independent report on technical education and we expect an expanded IfA to be well placed to take forward its recommendations and wider reform to technical education,” it said.

The new chair will work with the current shadow chief executive Peter Lauener “on designing the processes and structure of the institute” a task which will include “the location of the organisation, level and allocation of resource, use of digital technology and mode of operation”.

The government advertised for eight board members, with a salary of up to £15,000 available for each position

The DfE announced last week that Mr Lauener had been installed as the IfA’s shadow chief executive.

He’s doing the job role alongside his existing responsibilities as head of the Skills Funding Agency and the Education Funding Agency.

His appointment came four months after the previous shadow chief executive, Rachel Sandby-Thomas, announced she would be leaving after just two months in the job.

The former Barclays chief executive Anthony Jenkins was also announced as the shadow chair in June, while Nicola Bolton, the former managing director for trade at UK Trade and Investment, was named shadow chief operating officer.

At the time, a government spokesperson said that the remaining board members would be appointed by the end of 2016.

The government advertised for eight board members, with a salary of up to £15,000 available for each position.

The closing date for applications was set for July 20, with interviews scheduled for September.

FE Week understands that the DfE received over 300 applications for the posts, but no announcement has been made appointments.