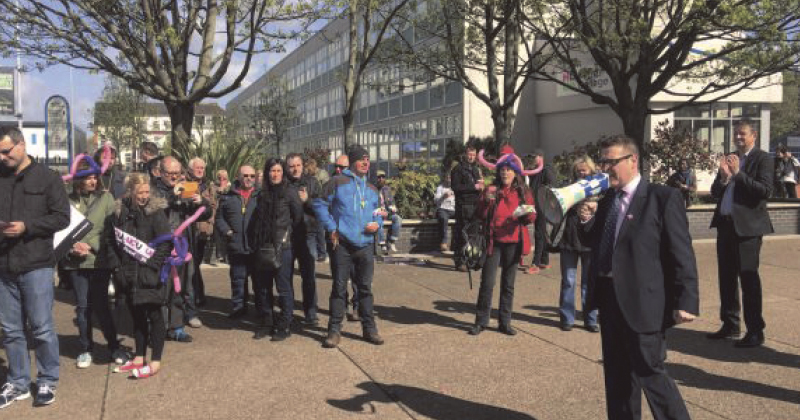 A senior MP has vowed to fight Hull College all the way over a string of job losses it wants to make.

Karl Turner, former shadow attorney general and MP for Kingston upon Hull, has previously joined striking staff on the picket line, and has promised to meet with the University and College Union again, as another strike ballot closes.

The UCU has balloted its members on the possibility of another strike, and “action short of a strike”, which could include work to rule – when employees do no more than the minimum required in their job – which closed on Friday (September 30), after the college announced of the summer vacation it would make around 70 redundancies and close its three nurseries before the end of the year.

He previously joined college workers on strike in May, supporting their dispute over pay and a controversial new lesson observation system.

Speaking ahead of the new ballot, Mr Turner told FE Week that “redundancies have become a yearly exercise at Hull College, which will not help staff morale”.

He said: “It is deplorable that many staff found out about redundancies during the summer holidays, reducing their ability to organise effectively, and have an input in the consultation period.

“It is students that will be hit hardest by these cuts with proposals to shut the on-site nursery service as well as closing down many vital student facing services which provide pastoral care.

“I am meeting with representatives from the UCU as a priority to discuss how we can fight these cuts in staff numbers. It seems that Hull College is more interested in protecting profits than providing the community with a vital service.”

The UCU said the plans “made a mockery” of what they claimed was a college promise not to cut more jobs following the last round of redundancies.

The previous strike ended in a payrise for staff and an end to no-notice observations.

In a statement, the college said: “Hull College Group is currently in consultation with trade unions and staff regarding a proposed redundancy programme of about 70 full time posts, which includes the closure of our nursery provision as well as the creation of 30 new roles.

“The Group is also in the process of recruiting up to 45 new jobs as part of our highly successful HCUK Training commercial arm as we significantly grow our apprenticeship and commissioned work to employers.

A spokesperson for Mr Turner’s office confirmed that the college never responded to the MP’s public concerns over the letter.

More than eight in ten (86 per cent) members of the UCU at Hull College have voted in support of strike action over planned redundancies, while 96 per cent voted in favour of action short of a strike. The union will now meet on Monday (October 3) to discuss next steps

UCU regional official, Julie Kelley, said: “This ballot result clearly shows the level of anger among staff, who have already been demoralised by successive rounds of redundancies. The decision to strike is never taken lightly, but staff feel they have been left with no alternative.

“Closing courses and cutting facilities will reduce access to education for local people and diminish the student experience. We are urging the college to halt these damaging plans and work with UCU to find alternatives to more job losses.”