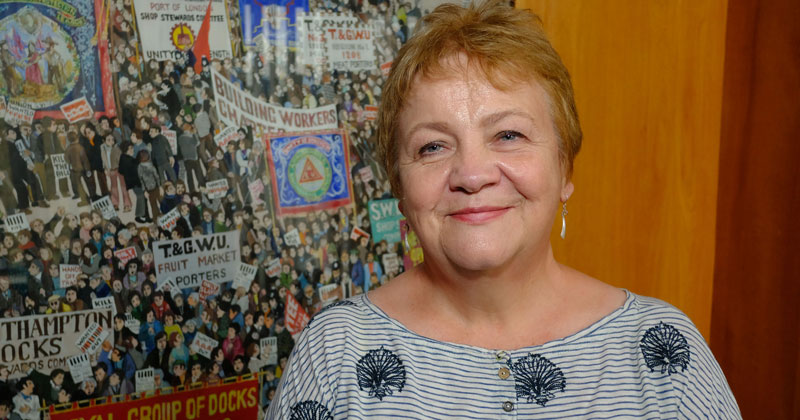 Liz Rees knows all about grammar schools — she attended three — but, unlike some prominent politicians, the experience has not made the Unionlearn director a fan of government plans to expand them.

“I just don’t get it,” she says. “They belong to the past, when about five per cent of kids went to university and many left school at 15.

Selective education obviously did her life prospects no harm, but Rees speaks passionately about the negative impact Prime Minister Theresa May’s new push for more grammars across the country could have on those that don’t make the grade.

“Grammar schools will do nothing for social mobility — and of course, no one is nostalgic for secondary moderns, which are the inevitable consequence of this policy.”

Rees attended three convent grammars between the ages of 11 and 18 because her family moved around a lot. But far from having the destabilising effect one might expect, Rees says that not staying in the same place made her “very independent” and “good at making friends”.

These qualities translated directly into the workplace, by all appearances. Rees’ first job on graduating from university was at Essex County Newspapers, as a telesales worker, where she immediately got stuck in.

At the time, she says, the print union, the National Graphical Association (NGA), didn’t have any organisation within newspapers, just in the print business.

“They were running a bit of a campaign to get union recognition. We were paid so much more poorly than the printers, so I got involved in all of that,” Rees says. Liz Rees with the first Director of Unionlearn in 1994

“We got an agreement – one of the early agreements in a non-traditional area – and the south-east Anglia branch of the NGA offered me a job.”

Getting an agreement from the employer to engage with them about pay was an exciting turning – point for Rees.

She says; “You feel like you’re on the right side, like you’re doing good work for good people who need a bit of a hand.”

This paved the way for her to become a union official, despite it not being her initial plan. But, she says: “I did love it, I’ve loved it ever since.”

She secured her next job with the Civil Service Union (now PCS) in London, moving from Colchester to Shepherd’s Bush with her then – boyfriend – now husband – at the age of 27.

Working with PCS led her to focus on the issue of privatisation, under the first Margaret Thatcher administration.

“When privatisation came in it was all about cutting people’s pay and their terms and conditions.

“In cleaning in the civil service for example, cleaners had reasonable pay and pensions and good terms and conditions – that was all swept away with privatisation.

“You were reduced to making the kind of deals which involved them ‘not being as bad as they would have been if you hadn’t been there’.”

John Sheldon, general secretary of PCS and her boss at the time, inspired her to stretch herself. Sheldon, she says, was a believer in promoting women – “a real feminist in his way”. They still keep in touch now, taking trips to the Chilterns to spot red kites, which she adores.

Rees took on the leadership of Unionlearn in November last year, after the retirement of former director Tom Wilson.

The post built on her experience from her previous role as head of TUC Education, where she managed course and curriculum development, accreditation, tutor training and building and maintaining partnerships with FE colleges. “I’m a committed educator,” she says, “but I come at it from a trade union perspective.”

She recalls a highlight from her time in the position as “getting the wonderful Courtney Pine, the world-class jazz musician, to play at an event to launch some work we did to help reps tackle racism”.

“To have the absolute best in the world play for an invited audience and weave between the tables riffing on text from the workbook which we had projected into the walls was totally unforgettable.

“I just asked him and he said yes! That was a valuable life lesson.”

Rees says that the importance of Unionlearn is its ability to reach people who have had no offer of training. “12 per cent of our learners have no qualifications at all, and 11 per cent have English as a second language,” she explains.

Supporting these individuals into learning is Rees’ priority.

She adds: “The high quality apprenticeships – the BAE systems or Rolls Royce – will go to the best candidates, and they tend to be the ones who have already had some advantages.

“People who haven’t had that will miss out and unions have got a key role in making a difference to them.”

Rees was preparing for a big anniversary when we met  – and not just the end of her first successful year leading Unionlearn.

She was readying herself for an early rise on Saturday morning to head down to Brighton, where 80 of her family and friends will be waiting to help her celebrate 40 years together with husband Nigel, whom she married when she was still working for PCS.

She is clearly excited, and as we get talking, colleagues pop in to wish her well for the festivities.

To top it off, behind the desk in her office – which is decorated with photographs of both Nigel and their daughter Athena – is a big bunch of flowers and cards from friends who can’t make it to the party.

Family is clearly important to Rees. Born in Musselburgh in Scotland to teacher parents, she grew very close to her two younger sisters Madeleine and Louise.

My grandmother encouraged them all to get their education

The fact that her family moved around a lot brought them together, she says. “You’re thrown back upon each other quite a lot, and as you’re growing up you do a lot of things together and share a lot of special times.”

She is also proud to tell me the story of her grandparents on her father’s side, who brought up six children on a docker’s wage in Cardiff and managed to send them all to university. “They had their degrees framed, going up the staircase,” she remembers.

“They had a real sense that education is the key to transforming your life.”

“It certainly was the case in that family. My grandfather worked hard to keep everybody clothed and fed, and my grandmother encouraged them all to get their education.”

She adds that this seems like a dream compared to accessing higher education today: “To be able to bring up six kids to go to university on a docker’s wage? I don’t think that could happen, especially with the tuition fees and all the added costs.”

Rees looks back fondly to her own time studying English at Keele University.

“I wanted to go there because it was a four-year course with a foundation year,” she says.

“Those were the days when four years, three years, you did what you really wanted to do and what you loved.”

Rees says she would happily “do all that again”, and envies her daughter Athena, who is currently studying English and History at the University of Sheffield.

Athena, now 20, is another family member who has been an important influence and inspiration to her.

“She totally changed everything,” says Rees. “You’re busier but your priorities sort themselves out quickly. Your child becomes the number – one thing.”

After school, Athena decided to take a year out and travel to China, where she secured herself an internship on an English – language newspaper in Shanghai.

Rees comments: “It was really amazing to see your kid on the other side of the world, doing this stuff. I saw her byline and was just so chuffed.”

Quite a different entry into the world of newspapers from her mother’s, but – with her formidable family history – one that may well lead to great things, one can’t help musing.

That’s easy for me. It’s ‘The Leopard’ by Giuseppe di Lampedusa. I’m a big re-reader and I read this every couple of years. I first read it in my 20s and then I saw the Visconti film and went back and read it again. It’s a wonderful, wonderful book.

What do you do to relax?

The theatre. I’m good at getting cheap tickets. Living in London you can see the best of theatre. That’s got stronger and stronger over the years, I suppose as you get a bit more cash as well you can think, well I’ll pay £50 for a ticket.

I can remember wanting to be a private eye. I saw myself in the coat and the hat a la Humphrey Bogart. I can remember that. I don’t have any other strong memories.

Who do you most admire, living or dead?

Pussy Riot. A feminist punk collective – what’s not to like. They are like lionesses those girls. They are brave and fight the system and I really admire them.