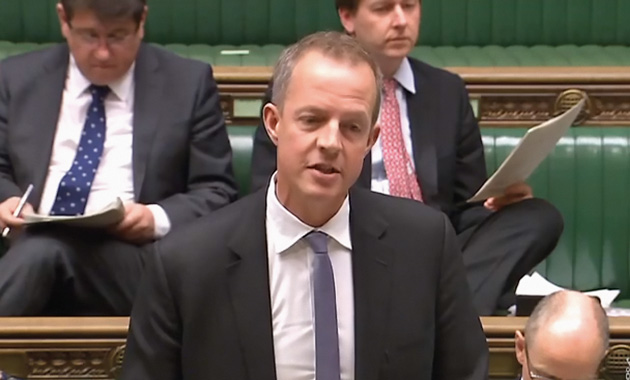 Nick Boles MP has resigned from his role as skills minister.

In a post on his Facebook page, posted at 3.40pm today, Mr Boles said that it was the “right time for me to return to the back benches”.

His resignation, which he confirmed on Twitter, comes almost exactly two years to the day that he was first appointed to the role.

His Facebook statement said: “As David Cameron prepares to visit HM the Queen and tender his resignation I want to add my voice to those praising his remarkable service as Prime Minister and leader of the Conservative Party.

“It was a huge privilege to be part of his government.

“I want to thank him for offering me the opportunity to serve my country.

“I believe that this is the right time for me to return to the backbenches.

Mr Boles said two skills-related achievements were among the things he was most proud of from his time in office.

The other, he added, was the “development of the government’s Skills Plan which heralds a transformation in the status and quality of technical education in England”.

In the past six months Mr Boles has repeatedly refused interviews with FE Week (see table below). In fact, his lack of engagement with the media over FE and skills reforms, particularly apprenticeships, proved to be very frustrating for us and our readers. Despite the lack of engagement in recent months, Mr Boles has featured regularly in FE Week during his time as skills minister, often in cartoons. Here’s a selection of our favourites: Edition 132 – On taking over from Matthew Hancock as skills minister, Nick Boles relaxed the rules set by his predecessor that limited new apprenticeship guidelines to two sides of A4. The official government guidance for employers developing Trailblazer apprenticeship standards, published in October 2014, stated that they “should be short and clear, taking up no more than two sides of A4”. Edition 138 – In May last year, Nick Boles was praised by FE sector leaders for his first stint as Skills Minister. Association of Colleges (AoC) chief executive Martin Doel said at the time that Mr Boles had “quickly grasped the importance of FE and training, particularly apprenticeships”. Edition 158 – In December 2015, Government adviser Nigel Whitehead warned the Trailblazer apprenticeship process was “out of control” and national occupational standards (NOS) were in “danger” of being bypassed. Mr Whitehead said he had raised his concerns with Mr Boles, who acknowledged there was “some work to do”. Edition 162 – At the end of January, the National Union of Students launched its #FEunplugged campaign, to force the government to recognise the impact that post-16 area reviews are having on learners. Shakira Martin, NUS vice president for FE, told FE Week that “it’s not news to say area reviews are the product of funding cuts, but there’s definitely a story in the way the FE sector’s very own Dr Frankenstein, [Skills Minister] Nick Boles, is cutting up the sector [through the area reviews] and trying to sew it back together – badly”. Edition 166 – In March, FE Week reported that Lewisham Southwark College had approached Newcastle College Group (NCG) in the autumn of 2015 with a view to “closer working”, despite the providers being based almost 300 miles away from each other. The move came ahead of the first meeting of the London (central) area review, which LSC is part of, scheduled for March 17. Edition 169 – In March, the Treasury published a budget report, revealing government plans for a 10 per cent top-up to large businesses’’ monthly apprenticeship levy contributions. However, the Confederation of British Industry director for employment and skills, Neil Carberry, warned: “Extra investment for apprenticeships will only help the small minority for firms who will be able to spend their whole levy.” Edition 173 – An FE Week parliamentary debate in May heard speakers protest that the apprenticeship levy was drawn up in “a darkened room”, leading FE organisations to feel they were left “outside the tent” during the drafting process. At the event, which was hosted by shadow skills minister Gordon Marsden and sponsored by OCR, Gemma Gathercole, head of policy at OCR, insisted that examining bodies had been shut out of the reforms. Edition 176 – On June 4, FE Week reported that Citroën UK had become the second employer branded ‘inadequate’ by Ofsted under the common inspector framework. This raised questions about the government’s move to encourage more employers to run their own training, with the average Ofsted rating across all eight employer-providers inspected since September months being just three. Edition 180 – At the end of June, the skills minister, along with secretary of state for education Nicky Morgan, and schools minister Nick Gibb, all backed Michael Gove’s now-abandoned bid to become the next Prime Minister. The apparent decision by Nick Boles to support former education secretary Gove in the Conservative Party leadership race came after he defected from the campaign of Boris Johnson, who announced he was out of the running on June 30.