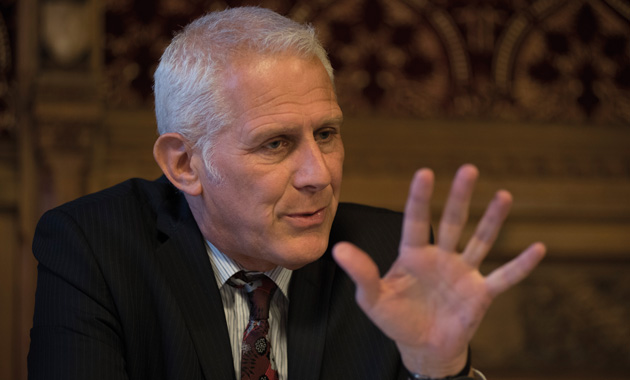 He clashed with skills minister Nick Boles in parliament over the “terrible” rates of progression from traineeships to apprenticeships last week, which FE Week first uncovered with a freedom of information request in June.

Progression figures show that overall progression from traineeships to apprenticeships stood at 22 per cent, but for those aged 19 to 24, it dropped to just nine per cent.

Citing our figures, he asked: “The Labour party has consistently supported traineeships for getting many more young people into quality apprenticeships, so why has the government wasted three years failing properly to promote, explain or target them?

“Ten days ago the minister warned about Brexit uncertainties threatening apprenticeships growth and the levy, so will he now spell out new initiatives to tackle that increase in traineeships that is needed, including support to FE colleges and providers who are desperate to press ahead with them or else risking failing that young generation?”

Mr Boles dodged the questions, accusing Mr Marsden of trying to “narrow this programme whose great strength is its versatility”.

He said: “He will know that traineeships are not only about pre-apprenticeship programmes.

“The whole point is to take people into either apprenticeships or jobs or further training – whatever is best for them.”

Mr Boles also referred to FE Week in his answer, calling it an “interesting publication” and saying he was “delighted” that Mr Marsden was an “avid reader”.

On the point that he makes, I am delighted that he is an avid reader of FE Week – it is an interesting publication

Speaking afterwards, the shadow minister insisted that Mr Boles’ response was not adequate “in any shape or form”.

“He ducked the terrible figures on completions for traineeships and was complacent over the current situation,” he said.

“It is all very well talking about the programme growing, but if we don’t get a proper scheme that fills the needs of the economy and creates more apprentices, then that is no good.”

Traineeships were introduced in 2013 as part of the government’s drive to help low-skilled young adults onto apprenticeships, but take-up has remained stubbornly low, and questions have persisted about their purpose.

Publicly available statistics only give overall “positive” progression figures from traineeships – to jobs, apprenticeships, further training or education – rather than for each of these outcomes separately.

Our FoI request to the Skills Funding Agency was prompted by the government’s refusal to reveal how many people had moved onto an apprenticeship after completing a traineeship, despite repeated requests.

Richard Atkins was Association of Colleges (AoC) president when the body made traineeships reform one of its key general election manifesto pledges last year – and said the scheme “should be converted into pre-apprenticeship training, specifically created to prepare 16- and 17-year-olds for a full apprenticeship”.

Presented with FE Week’s findings, he said: “I suggest that a review of traineeships is undertaken this year, so that more young people are able to fill the employer vacancies for apprentices.”