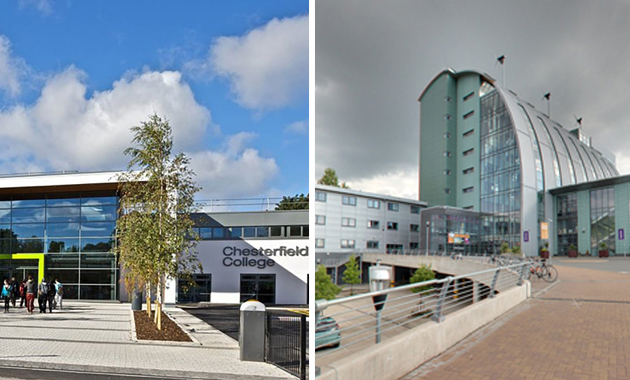 Dearne Valley College will join forces with the RNN Group – which is made up of Rotherham and North Nottinghamshire Colleges – while Barnsley and Doncaster colleges are also set to link up.

The outcomes were announced by Sheffield City Region, the area’s local enterprise partnership and combined authority, on Friday June 17 following the final area review steering group meeting the day before.

FE Commissioner Sir David Collins, who oversees all area reviews, said: “I am very pleased that the institutions involved all contributed so positively to the process.

“The Sheffield City Region’s partnership approach to this important work is very welcome and sets a precedent which other areas will be eager to follow.”

Chesterfield College, which has also been involved in the Sheffield area review, revealed on Monday that it is exploring a partnership with a college outside the area.

Its collaboration with Derby College means it will go through the area review process again.

However, this time it will be as part of the Derby, Derbyshire, Nottingham and Nottinghamshire review, which is due to start in November.

The Sheffield City area review was one of the first to be announced last year, and held its first steering group meeting on September 28.

It is only the third to have concluded so far, after Birmingham and Solihull, which finished in March, and Tees Valley, which closed in May.

It was originally chaired by Sir David, but this was subsequently changed to Julie Kenny and Nigel Brewster, representatives from the Sheffield City Region LEP.

The FE Commissioner’s positive comments about the process in Sheffield contrast with deep ongoing divisions in the nearby Manchester area review, which have previously been exposed by FE Week.

John Connolly, chief executive of the RNN Group, said his organisation’s proposed merger with Dearne Valley College was a “good solution for the area”.

He said: “The colleges are adjoining catchments – there’s a bit of overlap between us – and it creates some good opportunities for specialisation and to maintain the breadth of the curriculum that we’ve currently got.”

He said: “Our plans to work with Derby College were born because both colleges share the same ethos, drive and quality approach to ensure we are developing a skilled workforce so it makes sense to make the most of our strengths and geographical location by working together.”

Other recommendations from the review include keeping Sheffield College standalone while it focuses on improving its standards and finances.

Sheffield College’s chief executive Paul Corcoran said the college welcomed the review recommendations, and would “always be open” to working with the other colleges.

The two sixth form colleges involved in the review, Thomas Rotherham and Longley Park, will explore academisation as part of multi-academy trusts in their areas.

Barnsley, Doncaster and Dearne Valley Colleges did not respond to FE Week’s request for comment.