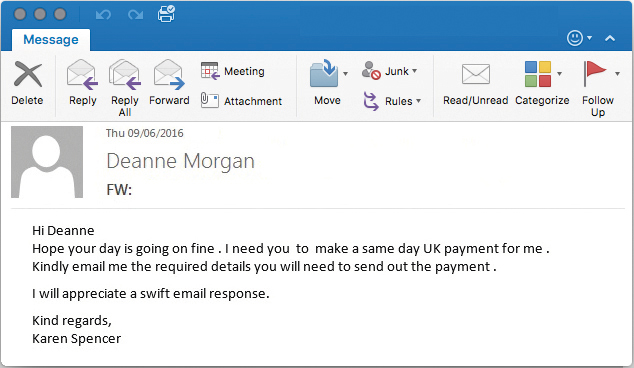 Colleges have again been warned to be vigilant after fraudsters posing as principals have been foiled in a string of attempted scams to hit the sector.

But despite looking “very realistic”, staff identified them as fake and thwarted the fraudsters.

One email sent to Ms Morgan read: “Hi Deanne, hope your day is going on fine. I need you to make a same day UK payment for me.

“Kindly email me the required details you will need to send out the payment. I will appreciate a swift email response. Kind regards, Karen Spencer.”

Ms Morgan immediately queried the request with her principal through a different address, and it was quickly confirmed as a scam.

She has since sent an email to other colleagues in the FE sector warning them to be wary of this type of con.

She wrote: “Recently I have received several emails seeming to be from my principal which are scams.

“They obviously do their homework and know who the principal is and head of finance person is (and spell my name correctly — which is very rare), with very realistic imitation email addresses.

“One email was from the ‘principal’ requesting an urgent payment. So be aware that these kind of scams are circulating.”

FE Week reported on a similar incident last year when another fraudster, posing this time as the principal of Westminster Kingsway College, was stopped after requesting an urgent payment of their own.

Again, the request appeared to be genuine, but staff noticed the reply didn’t match the principal’s email address and checked with the boss himself.

And just last week FE Week reported of other “sophisticated” scams that have been targeted at colleges.

The Mary Ward Adult Education Centre nearly fell victim to a con involving fake faxes, before the college’s bank contacted them to question a suspicious payment.

Luckily the college stopped the payment after its bank queried the request with them.

The Education Funding Agency also sent out an alert on May 26, warning customers of an attempted scam impersonating Portakabin Ltd, which makes portable buildings often used by schools and colleges.

Portakabin said it had been able to flag up the attempt internally and report it to the bank being used by the fraudster.

Also last year, some colleges were targeted in a bailiff scam involving a series of phone calls with con artists.

At the time of going to press, it was understood no college had fallen for the scams. FE Week has passed details of the incidents to Action Fraud.