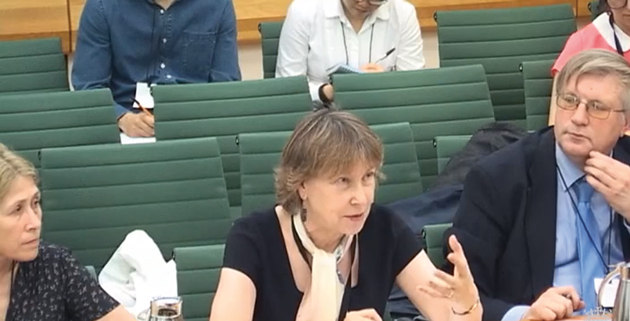 The apprenticeship levy should not be limited to large employers, according to the senior government vocational education adviser who first proposed it.

Professor Alison Wolf (pictured), who made the case for an employer levy to fund apprenticeship training in a report published days before the government first unveiled the charge, told MPs that the change seemed to have been made “the night before”

She told the subcommittee on education, skills and the economy on Wednesday (June 8) that it was “very odd” that the levy, which is due to be introduced in April 2017, will only be paid by employers with a payroll of at least £3m.

Professor Wolf said: “One of the mysteries to me remains why – well, I can imagine why politically – we created another problem for ourselves by saying there is only going to be limited number of employers who are involved in this, and there’s going to have to be a completely separate system for small businesses.”

The professor, who is also part of Lord Sainsbury’s panel looking into technical and professional education reforms, continued: “Nobody in government has given me an explanation, and why would they?

“I suspect it was one of these things that was decided the night before.”

She said she had “asked people”, and nobody had “given me a good explanation of this or a coherent post-hoc rationalisation of how that will actually work”.

Professor Wolf stressed that she found this worrying.

“If you’re going to have a proper apprenticeship system, and one that’s attractive to young people, you’ve got to get small and medium employers involved,” she said.

In response, a spokesperson for the Department for Business, Innovation and Skills (BIS) said: “The levy will put apprenticeship funding on a sustainable footing and improve the technical and professional skills of the workforce.

“Small employers who do not pay the levy will still have access to government funding to deliver apprenticeships.”

The spokesperson added that BIS was still consulting on the issue.

She said: “BIS has met with 400 employers to discuss the design of the digital apprenticeship service, and over 2,000 employers have responded to our surveys about the service design.”

Later in the same session, Martin Doel, chief executive of the Association of Colleges, accused the government of “very much making policy on the hoof”, rather than rolling the levy out “in a considered, properly pacey way”.

The inquiry, chaired by the MPs Neil Carmichael and Iain Wright, aimed to probe the merits of government reforms amid the drive to increase take-up.

Alison Fuller, professor of vocational education and work at the University College London Institute of Education, also told the panel that uncertainties over the Institute for Apprenticeship were causing concern for employers.

She said: “We’re not sure what the functions are going to be, and it’s all very uncertain.

“I know that employers are concerned about this.”

Professor Wolf was also asked about the delay to the publication of Lord Sainsbury’s report, on which FE Week has previously reported.

She said: “Help! What am I allowed to say? It seems to have been caught up in the grid at Number 10. It might be the referendum. It’s finished, it’s submitted. I don’t know how you guys get hold of it.”