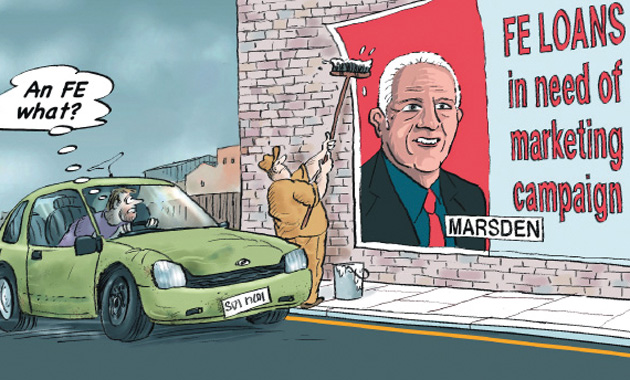 The government must do more to promote the newly-expanded FE learner loans, to avoid the danger of low take-up at the start of the new academic year, the Association of Colleges (AoC) has said.

The government announced that it would expand FE tuition fee loans to learners aged between 19 and 23 at levels three and four, and 19 and above at levels five and six, during last November’s Budget.

Applications for the new advanced learner loans will open on Monday (May 16) for courses starting from August 1.

But an AoC spokesperson told FE Week that “the government needs to do more to promote the scheme nationally, in the way they have for university loans and tuition fees”.

She said it would be “likely that take-up of the new loans will be fairly low in autumn 2016”, but suggested the numbers would “pick up once the scheme gets established”.

FE Week reported in February that the responsibility for promoting the new loans would lie with providers, after the government admitted it had no budget to market them.

Take-up of the existing FE loans for learners aged 24 and above at levels three and four has remained low since they were launched in 2013.

Figures published by the Department for Business, Innovation and Skills (BIS) in February showed that there had been 56,950 24+ loan applications so far in 2015/16, just up on the 55,100 application which had been made at the same time last year.

And figures published last October showed that just 38 per cent of the £397m budgeted for FE loans in 2014/15 was awarded, meaning that providers missed out on £250m in loan cash.

Loans for apprenticeships were scrapped soon after they were launched — after the Student Loans Company received just 404 applications in seven months.

And new research published on Thursday by BIS found that numbers of 24+ learners on courses eligible for loan funding dropped 31 per cent in the first year the loans were available.

A BIS spokesperson acknowledged that take-up of the new loans would be low at first.

She said: “We appreciate it may take a little time for colleges and training providers to adjust to the expanded loans system, but we expect to see greater pick-up in the future.”

While the government does not have targets for numbers of learners taking out a loan, the spokesperson said that “over time” the new loans would lead to “an additional 40,000 learners studying for high-level technical qualifications”.

She added: “We have expanded advanced-learner loans so they are available to everyone aged 19 and over studying at level three to level six, and have ensured there are sufficient funds available to allow for increased take-up.”

The loans expansion comes at the same time as the government is consulting on introducing maintenance loans for FE learners aged 19 and above at levels four to six.

The consultation opened on Mar 24 and runs until June 16.