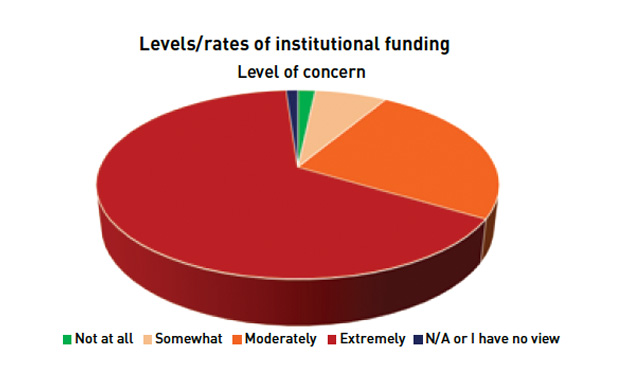 Funding is still the biggest source of worry, the latest FE Week and Policy Consortium survey of over 730 sector leaders has found.

It topped the list of concerns once again in the third annual FE Week sector survey — which was carried out by FE and skills experts from the Policy Consortium.

The latest results did, however, indicate that respondents might be feeling slightly more optimistic about finances than they were a year ago.

Compared with 2015 — when 72.8 per cent of survey respondents said they were “extremely concerned” about levels of institutional funding — just under two thirds (65.3 per cent) gave the same response this year, a fall of 7.5 per cent.

Those who classed themselves as “moderately concerned” about institutional funding, meanwhile, rose from 17.9 per cent to a quarter — showing that fears do remain, but have eased slightly over the year.

This change could have been influenced by Chancellor George Osborne’s decision not to deliver cuts in his autumn statement, in which protection of funding for the “core adult skills participation budgets in cash terms, at £1.5bn” was confirmed.

But analysis by Policy Consortium member and FE journalist Ian Nash (see his exclusive expert piece for FE Week), and comments left by participants, indicated that the issue is still causing sleepless nights.

One respondent wrote: “I have seen the word ‘good’ used to describe the funding settlement for FE in the November spending review.

Another felt more reassured: “I am much less anxious about finance and funding than 12 months ago. The multi-year funding framework put in place last November is very welcome, as is the higher funding rate for land-based colleges.”

The drop in respondents feeling “extremely concerned” from 2015 to 2016 was also reflected in the answers given on learner funding, as well as on the pace and volume of change.

A lack of clarity around change was the focus for some comments.

One participant said: “I suppose the changes at the moment make us all feel that we are treading water, with regards to the new curriculum delivery, and until it is embedded it will be a challenge to know how to plan for our own delivery.”

Another added: “Still a lot of unanswered questions with new funding structure and it is starting soon.”

The theme of uncertainty in responses from the survey echoed what FE Week heard in our parliamentary debate on the apprenticeship levy on May 3 (See page 8), where sector leaders admitted that they felt they had been “out of the tent” on decision-making.
One survey respondent, for example, commented: “Each new government and skills minister wants to bring in changes.

“My main concern over current changes, particularly for apprenticeships, is the lack of involvement that FE professionals have had, coupled with a huge lack of understanding of what apprenticeships are within the teams overseeing the changes.” Colleges have key role to play...