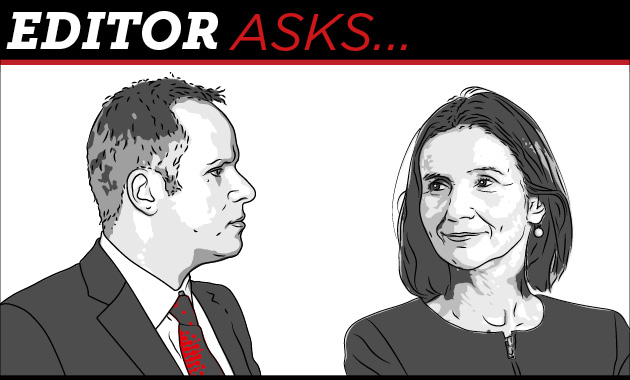 The launch date for the apprenticeship levy, due in April next year, needs to be postponed unless the government backs down on its phased implementation plan, the director general of the Confederation of British Industry (CBI) has said.

Carolyn Fairbairn told an audience of bosses that businesses were experiencing “deep frustration over the levy plans as they currently stand” during a speech in the City of London this week.

I spoke with Fairbairn, who was appointed director-general of the CBI in November last year, before her speech to discuss the CBI’s concerns about the implementation of the apprenticeship levy, and why she believes a “radical rethink” is necessary.

…this really needs to be rethought in some quite fundamental ways

The levy on large businesses, first announced by Chancellor George Osborne in the July budget last year, aims to raise revenue to help fund all post-16 apprenticeships in England. It requires all employers operating in the UK with a pay bill of over £3m a year to submit 0.5 per cent of their payroll to the levy as an investment in apprenticeship programmes.

Initially reluctant to admit that the CBI wanted the postponement, Fairbairn admitted to being concerned that “the clock is ticking”, and described the current timeline as “extraordinarily tight”.

“We are hearing from our members right across the country that this really needs to be rethought in some quite fundamental ways,” she said, adding: “delay is certainly an option”.

The CBI does want the levy system to be in place by the government’s scheduled date of April 2017.

In her speech, for example, Fairbairn called for the digital apprenticeships system, which manages levy spend, to be “ready and able to support the delivery of apprenticeship training which businesses need, in full and from the start”.

…they will reduce the number of apprenticeships

However, this is not what updated government guidance on how it will work implies, after plans were revealed for a phased delivery — and the system is not now expected to be fully operational until 2020, as FE Week reported on April 21.

I questioned Fairbairn on how these demands could possibly be met, given that we are just 11 months away from the official launch. In response, she accepted that “if that is the case, then we think there’s really no option but to have a delay — absolutely right”.

She told me that if the current deadline was to be properly met, work on the levy would have to be “really accelerated” and solutions to “a large number of unanswered questions” would need to be offered soon. “How much funding can be spent on each apprentice? Who can it be spent on? How will the system work in the devolved nations?” Fairbairn asked, emphasising the gaps in policy that have caused concern for CBI members.

Without answers on issues such as these, she added, there is a risk of a “half-finished system” being implemented next April. And while Fairbairn told me that the CBI’s members supported the need to bridge the skills gap, she admitted that they were generally unenthusiastic about the levy as it stands.

“Did they like the idea of an apprenticeship levy of 0.5 per cent pay roll tax? No they did not,” she said. “That was a shock, and I think that it has been something really not welcomed, because it feels top-down.”

We also discussed another key topic from Fairbairn’s speech — the new Institute for Apprenticeships (IfA).

I asked her if the CBI felt sufficiently “in the tent” enough over the plans for the IfA at the moment, given the government’s initial promise that it would be employer-led.

“We think there is a long way to go to before it is really fulfilling its full role here, and it’s not yet business-led,” she said.

Currently, the only member of staff yet appointed at the IfA is the shadow chief executive officer, Rachel Sandby-Thomas, who was previously director general for skills, deregulation and local growth at the Department for Business, Innovation and Skills.

Fairbairn told me that the CBI wanted a stronger role for the IfA that includes measuring and managing the system around the levy.

“What isn’t happening [at the moment] is the involvement of the institute in the designing of the standards and the leading of the process,” she said. “One of the things we are calling for here is for the institute to be involved in the setting of measures that are about outcomes rather than just about number of starts.”

Fairbairn said the target of 3m new apprenticeship starts by 2020 was a positive ambition for the government, but that the progress of the learners must not be overlooked.

Without this, she said, the government’s ambitious target would be “insufficient” and risked the “unintended consequence of driving quantity over quality”.

I then asked her about another aspect of the CBI’s “radical rethink” — the suggestion to introduce an “allowable expenses” regime, which would let firms recover the cost of staff time and capital investment. She said that for a significant number of CBI members, who have existing apprenticeship schemes or training, the remit of the levy is “extremely narrow”.

“They’re now having to pay 0.5 per cent of payroll and they can only claim back a small part of their current apprenticeship spend,” she said.

However, she added, the CBI’s members recognise that the levy is going happen and want to make it work well.

“What is motivating our intervention is to make it better, to make it really solve the skills gap, to really be a once in a generation change,” she said.